JftC Western Conference Predictions are in!

Share All sharing options for: JftC Western Conference Predictions are in!

To recap, I decided we would poll the population to come up with a single "group" prediction for the Western Conference standings. We ran some polls. It got slightly out of hand. I believe there were fifteen polls in all. I poured over the data in a spreadsheet, got a headache, lost some unsaved work, got confused, whittled stuff away, discovered that the shoot-out point is totally random, and finally popped out the other end with what we (the population of this blog) seem to think the West will look like after the second week of April.

Since I made the whole process up as I went along, nobody should take it too seriously. But here are the standings:

If I had made my own personal prediction, I probably wouldn't have put the Wings that low or the Kings and Hawks that high. Detroit really ought to be more like their old selves this year, without the injuries and with Hudler back. Chicago, I have no idea how they will do, but I don't think they'll be in the top four. I could be wrong. Nothing would surprise me. I don't think they'll drop entirely out of the playoffs, but 5-7 is totally believable. (I actually wouldn't wish that on them; it's bad for hockey every time a championship team craps out the next season; I'd rather play a powerhouse Chicago than a decimated one.) St. Louis also might finish higher than 9; I kind of think they'll be a playoff team. Don't know who will lose out there, maybe Colorado. Nashville just always seems to make it for whatever reason.

After the jump, we'll look at what I learned about the shoot-out point and how it screws everything up.

A few comments on methodology. First, like I said, this is a hodge-podge. Second, since we didn't poll the Eastern teams, I used the Western teams' winning percentage in-conference (64 games) and applied to the 18 games each team plays against the East. Obviously, this assumes that the Western teams will do equally well against Eastern teams, which would not be the case in reality. But it's close enough for our purposes.

Especially since any fluctuation in the point totals that would result from adjusting the cross-conference numbers pales in comparison to the wide pendulum swing caused by the shoot-out point.

Much has been written on the topic of the randomness of shoot-outs. I will dig up those fine posts by people who aren't me and link to them here. The bottom line is, there is little to no correlation between real game success and shoot-out success, real game scoring and shoot out scoring, real game goaltending and shoot-out goaltending, and on top of all of that, there's very little correlation from one season to the next. Players who are shoot-out gods one year turn into steaming piles of **** the next. Because it's random.

I took a quick look at last year's shoot-out numbers, and saw that the fewest number of shoot-out wins was 2, and the highest was 14. So I used that as the range.

I then generated 11 (I don't know why 11, it just worked out that way) random sequences of 15 numbers between 2 and 14, using Excel's "randbetween" function. And I added those points to the totals for each team.

The result is, eleven different versions of next season, all based on the same opinions of our polled blog population, all starting with the same underlying numbers. The difference among these 11 predictions is the random application of shoot-out wins. Sometimes you get 2 points. Sometimes 14. Usually it's somewhere in between.

However, it's mildly terrifying to pick a random number between 1 and 11 and choose that column and say that's your season. Because, as the charts show, there's a wide range of possibilities depending on how the shoot-out points are distributed.

In the two charts, A-K are the eleven simulations. The first chart is point totals. The second chart is "seed." Green means you made the playoffs. Red means you didn't. The last column in the second chart indicates the range of seeds the team drew (for example, the Kings landed anywhere from 2nd to 6th). 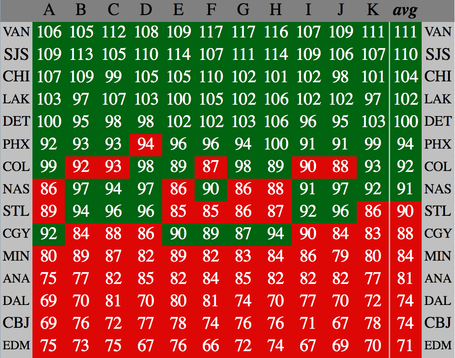 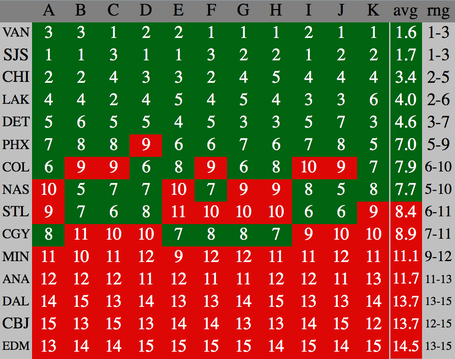 And just to underline: the variation is only due to the assumption that the outcome of shoot-outs is random. The way the teams "played" the season doesn't change; in fact, the teams' "play" was entirely determined by our predictions, per the polls. Only the shoot-out totals change from column to column.

The shoot-out effect is particularly strong for the middle five teams (in our "opinion," PHX, COL, NAS, STL and CGY). Colorado is frequently dumped. Calgary catapults.

The Kings finish with an excellent 97, or a record-smashing franchise-best 107. Or somewhere in between.

I will link to those randomness posts this evening and update the post. But I'm hitting publish now, as I'm eager to hear what you all think of this.