Share All sharing options for: Terry Murray's 2011-12 Kings: just how bad are they? [sortable chart fun]

I learned something about myself this morning. I channel my frustration into charts. This one shows the Kings' point totals and goal totals through the first 14 games of the last 16 seasons, going back to 1995. The other columns give you the team's final point total (F PTS), their point-percentage through 14 games (W% 14), their point-percentage over the remaining 68 games, not including the first 14 (W% 15-82), the difference between the 1-14 W% and the 15-82 W% (up/down), the final goals-for tally (Fin g), goals-per-game for the first 14 games (GPG 14), GPG over the remaining games (GPG 15-82), the difference between the two GPGs (up/down), and -- finally -- whether the team made the playoffs and which genius/idiot was behind the bench.

I'll leave the conclusions to be hashed out in the comments. However, here are two things I noticed right off the bat:
The table is fully sortable. Click on the headers. 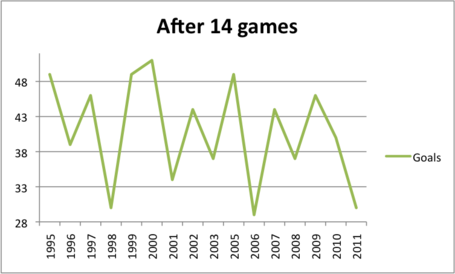 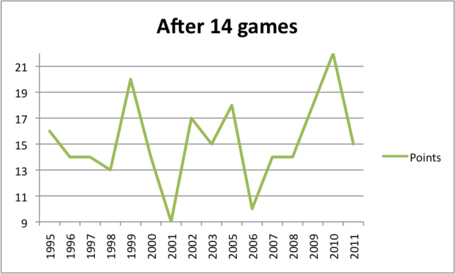