False Parity as a Graph

Share All sharing options for: False Parity as a Graph

Because I like to mess around with Excel, I found myself making graphs of teams' win-percentages in relation to their place in the standings. But a funny thing happened.

Let me back up for a moment. I have a little spreadsheet that tracks the W% of each team using three different point systems. (1) the current system; (2) a system in which there is no OT and every game ends in regulation, as a W, L or T; (3) a system in which there is OT and SO, but losers get zero points (i.e. no ties, no loser points, just wins and losses). That chart looks like this:

OTR is OT/SO combined record. DIFF is the difference between that system and the current one. The colors reflect whether that system helps or hurts that team, compared to the current system.

Every time I look at this chart, I see something new and interesting. For example, look how many teams are in the red (under W%) in the non-Bettman point systems. In the second system (WLT), everyone is significantly worse off, except the basement dweller EDM, who is only a little worse off. In the third system, all but three teams in the current playoff race take huge hits (the Kings are the lone benefactors; they leap from 9th to 4th). In the other systems, the teams sitting in 9th-14th go from all of them being in playoff contention, to only 2 (in the second) or 4 (in the third).

But, like I said, the graphs are what surprised me.

These three graphs each show the three systems; the difference is how the x-axis is sorted. In the first graph, it's sorted by W% in the current system. 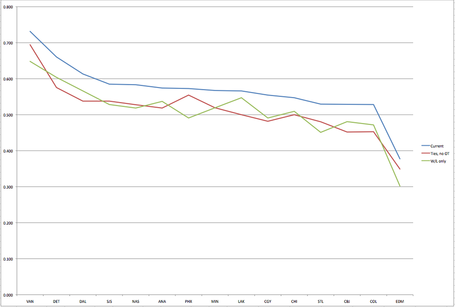 What leaps out at me is this: look how flat the blue line is, especially in the middle. That is the graph of the W%s in the current system. The middle is the contested 5-12 seeds. It's close to a plateau (it wouldn't be a perfectly horizontal line unless every team was tied in points -- a.k.a. Bettman's wet dream). Now let's look at a second graph, in which the x-axis is sorted by the W% of the second system (WLT, no Bettman point). 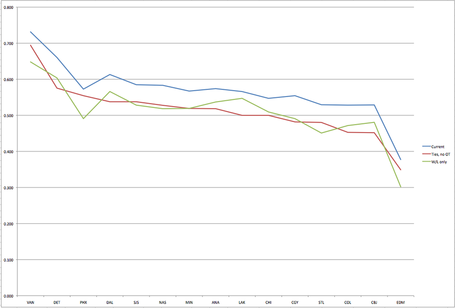 We've sorted by the red line this time (the WLT system). The slope is more precipitous and bumpy. That's because there is less of a cluster of points and more of a drop-off between seeds. In other words, less parity. Now, a third graph. This one sorts by the third system (keeps the OT and SO, but records wins and losses only, no Bettman point). 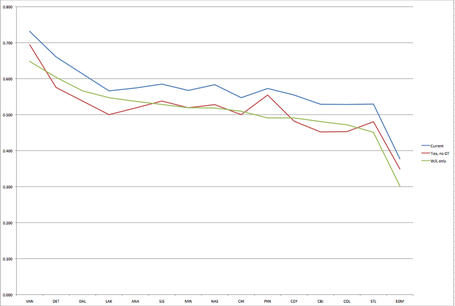 We've sorted by the green line this time. It's smoother than the red line in graph #2, but more precipitous than the blue line of graph #1. In other words, there is an increased point difference from seed to seed, but the rate of change is more constant. I would have to think about this a little more, but my first stab at an interpretation is that, by adding in the OT and SO, it smoothes out the bumps (why I don't know) but doesn't artificially create "parity."  Parity would be the flat-ish horizontal line, which is seen only in the first graph.

Bonus chart: this one shows the variance for each team under the three different point systems. The x axis represents the systems, the y axis represents place in the standings. The fifteen lines are the fifteen teams. The color key on the right is a little hard to read (click on the image for a better version), but the lines are sorted by rank in the current system, VAN on top, EDM on the bottom. 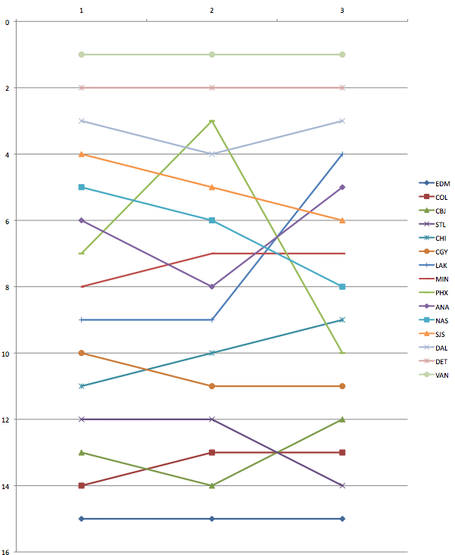 The top and the bottom are flat lines. That's because, in every system, the top two seeds and the bottom seed stay the same. The middle 12 teams, however, are all over the place. Two teams cross over the 8th/9th barrier (going from playoff team to non-playoff team, or the other way around), the Kings line shoots up; the Coyotes line shoots down. And the biggest snarl occurs around the 7th seed. Which (I think) means that -- at the very place in the standings where the haves are divided from the have-nots -- whether you "have" or "not" is capriciously system-dependent.