The History of the Kings vs. the Ducks on March 19th [fun with charts]

Share All sharing options for: The History of the Kings vs. the Ducks on March 19th [fun with charts]

Weekend's must-see game? West showdown between Ducks, Kings - Cross Checks Blog - ESPN
The marquee NHL game this weekend is a Southern California delight, as the Anaheim Ducks visit the Los Angeles Kings on Saturday night with points in the standings rarely meaning this much to both clubs this late in the season.

California Clash -- ESPN
Have points meant this much to both Anaheim and Los Angeles this late in the season? Nope.

And, in fact, it's been often-repeated wisdom that the Kings and Ducks have never been this close in the standings this late in the season. But is it true?

This chart shows the points totals of the Kings and Ducks (and the point total of the 8th place team) on March 19, from 1994 to 2011. I prorated the 1995 (strike-shortened) 48 game season numbers, so the data would play well with the others.

[click on the chart for the high-res readable version.] 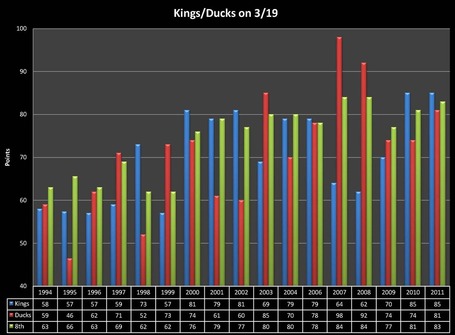