Is Vancouver the best team since the 1977 Canadiens?

Share All sharing options for: Is Vancouver the best team since the 1977 Canadiens?

And I'm tempted to end this post right here. But I should probably explain. I was watching NHL On the Fly last night after the Kings/Canucks game. Heidi Androl was guest-anchoring, or whatever the proper term is. When it came time to talk about Kings/Canucks, her analysis was as follows:

This elicited in me a not-entirely rational response. Mostly, I'm embarrassed to admit, anger. Anger and then meta-anger -- anger at the anger -- because why should that bother me...I want to say "so much," but I don't know why it would bother me at all.

I immediately began making a mental list of all of Van Halen's precursors in this field. I started naturally with Zeppelin (the shark incident, the Riot House, etc.), Faces (who had a f-ing open bar on stage when they performed), the Doors, (exposed privates), the Beatles (tours were described by Lennon as "Satyricon on wheels"), Robert Johnson (murdered by jealous husband), Lowell George, Keith Moon, Lennon and Nilsson (the Troubadour incident, Lennon with a feminine hygiene product taped to his head), the Rolling Stones (pick your bust, snorting your dad's ashes). This is a list that could literally go on forever...

So, back to Heidi. Like the Danette, she's young. She just doesn't know any better. Except it's worse, because there's no reason to go back decades to find a team that has played as well as Vancouver has this season. And you certainly don't have to go all the way back to the legendary 1977 Habs, with their 8 regular season losses.

Five years is even during Heidi's tenure. So, if she was paying attention, the answer to her own question would be, there's usually someone with approximately that record, and that team usually goes on to win the cup, or get knocked out in the 1st round, or somewhere in between.

However, since most of the teams on the above list did not have the benefit of the Bettman point, we ought to subtract Vancouver's nine loss points to see how they compare. Down to 104 points, over 78 games, that's a W% of .667, which isn't even close to making this list. My guess would be it's in the neighborhood of 50th-60th all-time. Which is good, don't get me wrong. Vancouver is a good team. I'll even go so far as to call them very, very good. But it's ridiculous to compare them to historically unstoppable teams, like the 1977 Habs. They're more comparable to the 2009 Sharks. And we know what happened to them.

I remember those Montreal teams. In addition to their absurd records, there was a sense, when you were playing them, that no matter what the situation was at that moment, no matter what the score was, there was no doubt that Montreal was going to win. You just knew that whatever lead you had was vapor and they were about to decide to stop toying with you and then you were doomed. Vancouver, on the other hand (and like San Jose and other teams who have never won -- yes, the Kings included, even more so), if they fall behind even for a period in the playoffs, everyone in Canuck nation will be chewing off their own fingers in paralytic terror that their team is going to let them down, as they always do. The Habs of old were more like a pool hustler who lets you win a few games before the betting starts.

It's almost enough to wish Anaheim would finish 8th. See, that's a win-win for me.

(Almost forgot, here's a graph of those .700+ finishes, over time. Click through for higher-res version.) 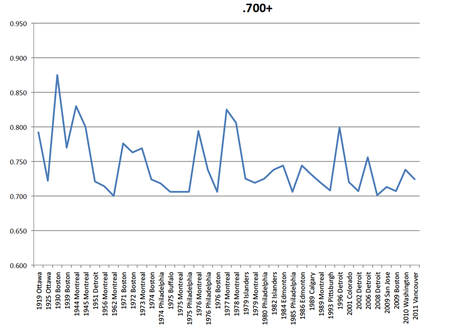