First, a little update on revenues and revenue-related gossip:

NHL players face tough cap call - NYPOST.com
The NHLPA has told agents that the union projects a salary cap of approximately $62.2 million next season if the players vote to trigger the 5-percent escalator [...]. That represents an increase of $2.8 million from the current $59.4 million cap, or approximately 4.7 percent. This means that, 1) the NHL's "record" revenues have not increased by the 5 percent the players voted to bump the cap for this season; and, 2) the cap would remain flat or even decrease slightly for the first time if the players opt not to adopt the inflator for next season. This is a preliminary number recently given to the agents in the union's "marketplace" assessment that could change slightly depending upon the revenue generated in the playoffs. [...] There is no guarantee that the union will vote to adopt the 5-percent inflator, given that doing so leads to increased escrow as a tradeoff for additional dollars in the system that benefits free agents and high payroll, powerful teams seeking to keep their rosters intact.

I would just underline that the players may well NOT vote to artificially bump up the cap, since it ultimately comes out of their own pockets. Of course, I thought they would have figured that out and said no to the bump last year. Maybe the new NHLPA boss will explain it to them.

I am surprised (though why, I don't know) that the "record revenues" reported last week aren't all that they were cracked up to be. But in any case, I think it's a reasonable assumption that the cap will go up to the $62MM range Brooks prophesies. So let's set the cap at $62.2MM and see where the Kings stand.

(Hint: you will be surprised)

Let's Start With the Obvious 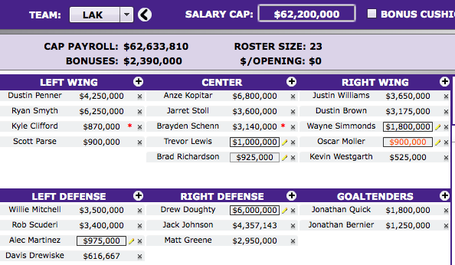 That's $444K over the presumed cap. The union could vote down the inflator, and we'd be at $59-ish again. Or the playoffs will save our bottom-line, and we'll get a bigger bump...right, yeah, that's going to happen. The Kings could get lucky, but I wouldn't count on it.

And before you tell me that I'm counting Brayden Schenn's bonuses, remember: THERE IS NO BONUS CUSHION NEXT YEAR.

Because: it's the last year of the CBA.

So, if Schenn is going to play, all of his salary is going to count. I haven't looked this up yet, but I'm 99% sure that a specific bonus only come off the cap when there becomes zero chance of it being earned. Which means that, for most of the season, carrying Schenn will all but certainly result in the full cap hit. There might be some relief as we approach the trade-deadline or whatever, but that's not going to help Lombardi ice a team in October.

If you want to bury Schenn in the AHL for a year (which, who knows, may be where he belongs -- I doubt it, but it could be true), then you could bring up Loktionov and subtract $2.1MM from the total cap hit. Which would bring the figure about $1.5MM under the assumed (but not guaranteed) ceiling of $62.2MM.

But that kind of sucks for Schenn. I doubt Lombardi would put him in a position where no matter how good he is in camp, he must stew for a year in the AHL.

Another problem is that, on the above roster, only Schenn and Clifford (and Loktionov) would be waiver-exempt, so aside from swapping Schenn and Loktionov back and forth all season, there's literally no room to move players around. Moller (next year), Lewis, Parse, Richardson, Westgarth -- all subject to waivers.

What does all this mean?

One thing for certain: starting next season, the Kings don't get to be that Cinderella team anymore; they are no longer the team with cap room to burn. They're going to have their noses pressed up against the ceiling. And expectations will adjust accordingly.

Also: unless Lombardi is willing to deal some other big salaries to make room, or unless Handzus and Ponikarovsky are willing to play for next to nothing, the UFAs are gone come 7/1. And there certainly is no room to sign the superstar UFA du jour.

Could still trade two or three $3MM+ contracts for Zach Parise though.