Share All sharing options for: Reading the Doughty Tea Leaves

Lombardi: Not much new on Doughty front " LA Kings Insider

[...] we’ll jump back into things with the latest update on the Drew Doughty contract talks, courtesy of a chat today with Dean Lombardi. There have been no new discussions in the past two weeks.

Keep this in mind when tracking rumors. Nothing has happened for two weeks. Nobody has talked to anybody. I would have to go back and read old posts, but it seems to me that's the norm, rather than the exception. There were a few weeks of silence before the draft, and a couple of weeks of silence after the draft (during the whole free agency hoopla). Mostly, there is just no talking.

And I think I know why. There's NOTHING TO TALK ABOUT. You've got money, and term. You can have a no-move or no-trade in five years, or not. You can have it be a level salary year to year, or front-loaded, or back-loaded. That's it. The Standard Player Contract is boilerplate.

They're not talking because they don't agree on money and term and maybe on the no-move/trade clause. This is not a labyrinthine process. It's fill-in-the-blanks.

The Kings have a long-term offer on the table, but it wouldn’t be a surprise to see the issue extend into late August, or perhaps even into September.

See? Kings have an offer on the table, and have had one on the table since mid-July, which is the last time they spoke. The reason there has been no progress is that Meeghty (yes, I'm sticking with that moniker for Doughty/Meehan; it's summer, we have to self-amuse) hasn't submitted a counter-offer. They're content to wait.

It’s worth noting that Doughty’s agent, Don Meehan, also represented Evgeni Nabokov when, in 2002, Nabokov held out before signing a contract with the San Jose Sharks (and then-GM Lombardi) in late October.

I think it's worth noting that Rich thinks this is worth noting. He's notoriously level-headed and conservative in his interpretations. The fact that he thinks a comparison to Nabokov is in any way germane tells me that it's now quite reasonable to be thinking about the possibility of Doughty holding-out.

As for the current Doughty negotiations, Lombardi said today, "I think it’s fair to say that in the last conversation, we set the parameters, as to where we feel his contract should be. We talked about a number of scenarios, and I guess now it’s their move. They never really responded."

They chose #4. That's what not responding to an offer means.

I would also point out that when Lombardi says "we set the parameters as to where we feel his contract should be" he's saying that Meeghty knows the range of possibilities, within which the Kings are willing to negotiate. Outside of that range (the "perameters"), there's no point in talking.

So they're not talking.

And how about the fact that the Shea Weber award happened inside the latest two-weeks of silence? I'm not even sure how to interpret that, other than to say it's pretty clear that Meeghty expects Lombardi to "widen" his parameters, and Lombardi is not in the habit of blinking. Neither is Meehan, come to think of it. He doesn't give a shit if Doughty holds out. And I think Lombardi will be content to let Viatcheslav Voynov, Thomas Hickey, Alec Martinez, Jake Muzzin and Nicolas Deslauriers stretch their wings in camp while Doughty gives interviews about being in great shape and looking forward to get back with the team.

I had been preparing an update on my post of a few weeks back in which everyone was invited to predict what the Doughty contract would look like and when it would be signed. I made a little chart that shows the dates everyone chose (grouped by week). 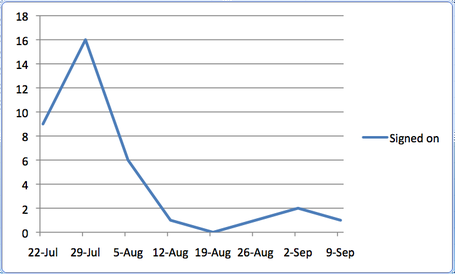 I was going to comment on the general optimism reflected in these predictions, but it turns out I don't have much to say about it. Most people thought this would be over by now. I predicted September 2 myself, but if I were making a prediction today, I would go with something closer to November. AEG might blink, or Doughty might, but I don't think Lombardi or Meehan are going to.