Which are worse, the Kings new jerseys or the fake jerseys from "Lethal Weapon 3"?

Share All sharing options for: Which are worse, the Kings new jerseys or the fake jerseys from "Lethal Weapon 3"?

Last night we were talking about the counterfeit look of the Kings new primary uniforms. I had said that they looked like made-up jerseys for a fake hockey team in a movie. A commenter reminded us all of the fake Kings jerseys worn by the Kings-ish team featured in a scene of Lethal Weapon 3.

Google helped me find a capture of this jersey. It's not great, but it will do. And the accompanying text is pricelessly on-point.

The L.A. Kings (?) in Lethal Weapon 3 Riggs and Murtaugh track a rogue ex-cop as he attends his favorite past time—A Los Angeles Kings game. Or is it? Several of the long shots clearly show recognizable Kings players—superstar winger Luc Robitaille especially—but once the action hits ice level, we get badly-outfitted extras with made-up logos on their chests. They **** you with the copyright infringements! They **** you with the copyright infringements!

And here's the capture. You tell me. The logo, aside from the fact that it looks like it was drawn by a six year-old, might actually be an improvement over what we have. 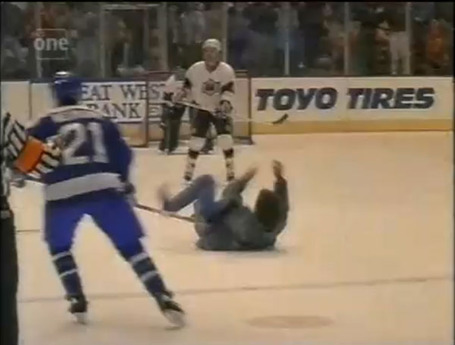 Okay, maybe not an improvement. But that's not really my point. The point is, imagine the current Kings logo on the jersey in that picture. Doesn't it look just as stupid?