Rumor Vetting: Looks like Schumacher is staying in North America (for now?)

Share All sharing options for: Rumor Vetting: Looks like Schumacher is staying in North America (for now?)

I had overheard in a few places that Kings prospect Michael Schumacher was considering staying in -- or was being held against his will in -- Sweden this season. So it was with some relief that I noted his presence in the Soo Greyhounds training camp/pre-season roster. I expect that means we will be seeing him in camp then.

The 2011/12 edition of the Soo Greyhounds is another step closer to being complete after the team's roster was reduced to 30 active players on Sunday morning.

Here is a picture of Schumacher at development camp two months ago. Note that Jamie Kompon is six feet tall. 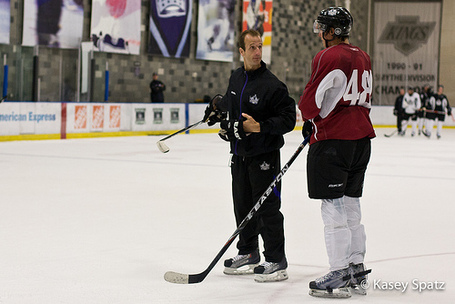 (Jamie Kompon with Michael Schumacher - via crzyb16agirl - aka Kasey Spatz)