Since You Asked: Premature 50 Game Evaluation

Share All sharing options for: Since You Asked: Premature 50 Game Evaluation

Lineup change, and one before the break " LA Kings Insider
SUTTER: "I look at it as tonight is Game 50 [...]. Tomorrow will be a harder day for the players than today is. Tonight is Game 50, and where are you? How does that mathematically equate to, say, where you were last year at this point? Or what it’s going to take it set it up for those last 32, what you’re going to have to have. Whatever that number is going to be, in terms of being a playoff team, we’re a team that’s going to finish 50 (games) tonight. Then you should be able to sort of figure what you have to have.’’

I was going to do this over the break, but Coach Sutter has set it up too well. I can't resist.

How does that mathematically equate to where you were last year at this point?

The left-most column indicates the game number. Next to that is the rank of this year's point total compared to the other seasons shown. Red indicates losing streaks going back a couple of seasons. Green is the Sutter Era. (Check out the 2006 column, which is way ahead of the pack; you might recall this as the season which ended with the wheels falling off, Sean Avery yelling at coaches in practice and getting suspended by the team, Andy Murray getting fired, the Kings missing the playoffs, Dave Taylor losing his job and...enter Dean Lombardi.)

What it's going to take it set it up for those last 32?

Back on December 19, I wrote this:

The Kings have 50 games left, 32 points. Let's pretend the playoff threshold will be 98 points. Could be a couple of points less, but counting on that would be foolhardy. So let's go with 98: the Kings need 66 points in their final 50 games. That's a .660 point-percentage the rest of the way. Last season, when their rock-bottom was in the middle of January, the Kings needed to go approximately .700 the rest of the way, and they did it, finishing on a 22-8-5 tear. This year, it's not as steep a climb, but it's longer (since we crapped out earlier - yay?). To get to 98, the Kings would need some version of 33-17-0. If you want to throw in the statistically-likely number of OT/SOLs, make it 31-15-4.

That's doable. Especially for a team that's supposed to be one of the best in the Conference.

I broke the games down into blocks of (usually) six or seven games, with an eye toward making the breaks as natural as possible (i.e. the beginning of a road-trip or home-stand). The green line is the All-Star break. The red line is the trade deadline. In general, the Kings need to win 4 for every 2 they lose.

R is days of rest. Hr is hours between games. TP is total points. P is points needed for that block of games. Rec is record. 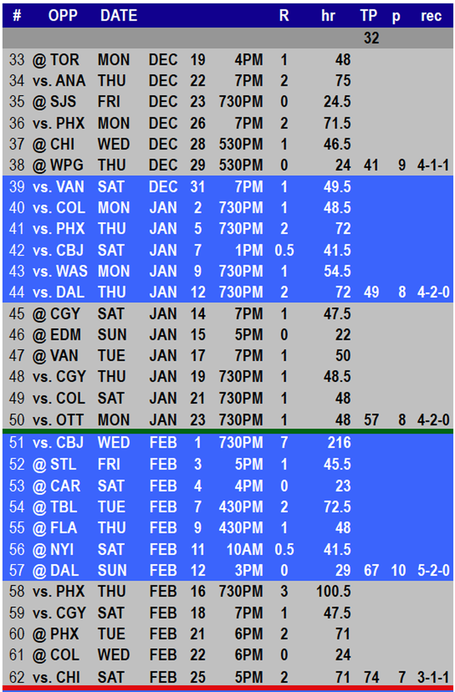 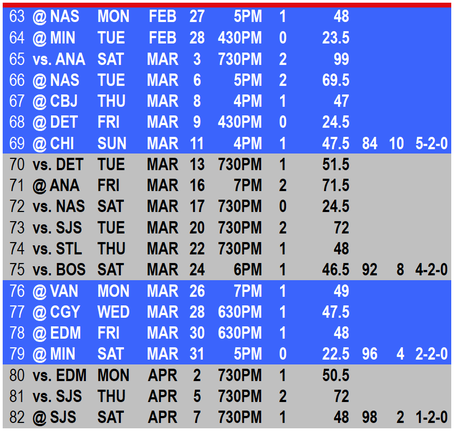 As you can see, I targeted 57 points through game 50. Which means we're one point away with one game left. So far so good.