With the LA Kings on an indefinite hiatus, the Valencia Flyers put on a show for local hockey fans with some help from the Kings themselves. A unique combination of junior league hockey and NHL presentation ensued.

[Note: Please welcome blog member HailRover as he comes aboard the writing staff at JFTC. --Niesy]

First, an intro. This is my first story at Jewels from the Crown, but I have haunted the comment boards here for quite some time. I'm a diehard Kings fan from LA, born and raised. Big thanks to Niesy for giving me the opportunity to write for the blog, and I look forward to contributing as much as I can. I may even get to write about the Kings playing hockey someday!

I was expecting my first post to be cynical. In the midst of this lockout, everything is seemingly centered around public relations, and it was my assumption that Kings Night with the Valencia Flyers might just be a giant PR move. Regardless, I decided to make the one-hour drive to check out this early season Western States Hockey League (WSHL) matchup. It's hockey, after all.

25 minutes before game time, I finally rolled in to the packed parking lot. (Way to show up early, everyone!) Nick Nickson and Daryl Evans signed autographs in the lobby, and Stanley Cup merchandise was prominently displayed next to Flyers tees and hoodies. When Kings host/emcee/ball of energy Jay Flats and the ice crew took the ice 20 minutes before the game, it still felt like a Kings-orchestrated publicity event.

Then Jay's mic went out. Maybe that was a sign, because from that point on it just felt like a junior league game where not everything is calculated or perfectly executed. Besides, the Kings crew just seemed happy to be at a game again. Bailey mocked the refs, the organist played the familiar Staples songs with gusto, and the Ice Crew high-fived fans and threw T-shirts into the crowd. But if anyone was thrilled by the increased buzz in the arena, it was the guys on the ice. One of Valencia's assistant coaches snapped a couple pictures of the packed bleachers before the puck dropped. The players were showing some nerves, throwing a ton of hits and attempting highlight-reel plays.

In the midst of all the hockey, there were some great collisions of Los Angeles and Valencia arena staples. The poor snack bar staff worked like crazy to accommodate the stomachs and livers of King fans, most of whom took advantage of the $5 hot dog/beer combo (advantage: Valencia). Kids scrambled to get autographs from the Ice Crew, the Flyers players and coaches, and even the young assistants who stood along the boards marking down shot locations and taking notes. Despite being between 16 and 20 years of age, the players didn't hold back on the profanity, and it was a lot more clear to us what was being said than it ever is at Staples. Fans in Kings jerseys mingled with families of the Valencia players in the stands. And it turns out that you can chant "Sharks Suck" even if they're not actually playing.

So, was it worth the $8 to see the real Flyers West? Absolutely. Most of all, it made me wish the NHL would get it together and get back on the ice. But if that doesn't happen anytime soon, you could do worse than making a trip to Ontario, Manchester, Bakersfield, or Valencia. Again: It's hockey, after all. 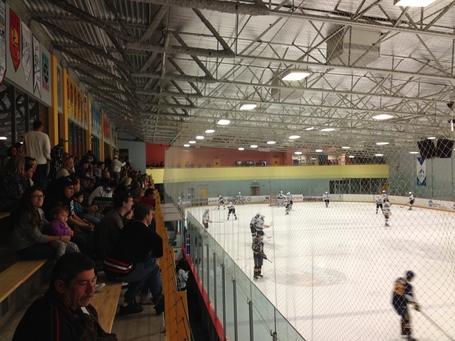 Remarkably, the first 15 minutes were scoreless, though there were a number of good chances. Midway through the first, the Seals' Kihisis Derocher was stopped on a breakaway by goalie Stephen Palmer, and speedy Flyers forward Austin Ehrlich was robbed on his own breakaway seconds later by Frankie McClendon. Ehrlich's line (all California natives) started the game, and they also started the scoring at 4:20, when Hunter Jensen found RW Preston Nowak for the game's first goal. They did it again 18 seconds later, Nowak converting a nice feed from Ehrlich, and Nowak completed his natural hat trick on the power play with 57 seconds left in the period. 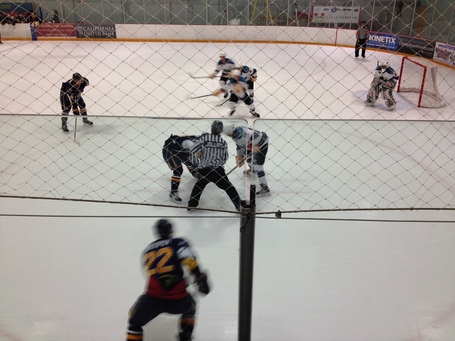 The expansion Seals kept fighting, but the rout was on by then. In fact, three other goals by the Flyers were disallowed in the first... apparently, the nets get dislodged quite a bit at this level. At 4:05 in the second, Ehrlich scored from Nowak and Jensen, and the Flyers scored an absolute beauty six minutes later. Nowak made a nice move to get the puck to Eddie Keshishian, who drove around two defenders and slid a gorgeous pass for Jensen to fire into a wide open net. The Seals got on the board a minute later via Jackie Pauley, but Valencia defenseman Camrin Roczey restored the five-goal margin with 35 seconds left in the period. 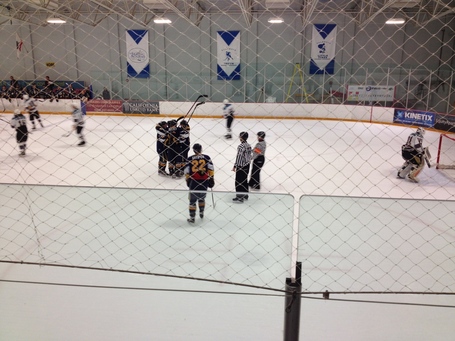 The Flyers could have relaxed in the third, but instead they decided to get the next 16 shots, adding power play goals from captain Jake Ryan and Russian import Kevin Antipov, and an even-strength tally from Keshishian. Pauley's second goal on a power play ended the scoring, but things got ugly when the Seals' Craig Hanisch was ejected for an elbow on Nowak. The 9-2 final (full box score here) would end up being the second game of a Flyers' series sweep, as the Flyers won on Friday, Saturday, and Sunday by a combined margin of 23-5. 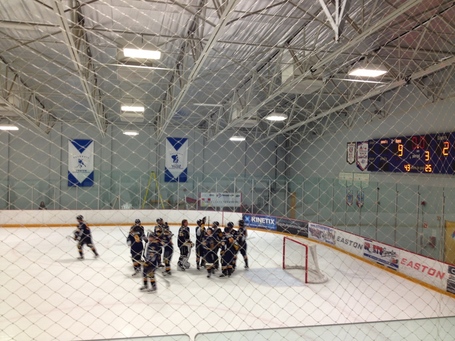