A Season-Long Lockout Could Hurt The Kings Most Of All

The defending champions face squandering a year of value contracts and losing a prime season of their window.

Share All sharing options for: A Season-Long Lockout Could Hurt The Kings Most Of All

So, this NHL lockout is still happening, and the prognosis for the season looks grim. Of course, that could change with a single phone call from either side or if, say, Jeremy Jacobs falls off of a cliff. (I'm kidding, I think. It's been a difficult almost-two months.) The two sides, in plain dollar values, are not so far off anymore. Still, I am a pessimist by nature, and I think most of us have seen enough of the process so far to know that these CBA talks are not being handled very well. Like most hockey fans, I want a NHL season -- I want it a lot -- but I'm very uncertain that there will be one.

How will the lockout affect the Kings? The most common sentiment I’ve read is that a shortened season will be to the team’s favor, allowing a better recovery from the grind of playing into June. This is probably true, but a lockout eliminating the full season would be an entirely different story. A lost season would be troubling and terrible for every team, but I think it would be particularly terrible for Los Angeles because 2012-13 was poised to be a great value season for the Kings. 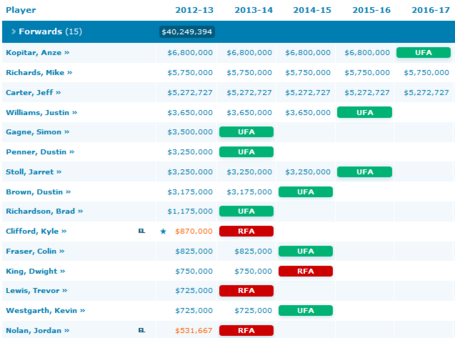 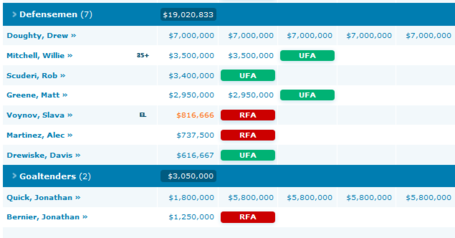 Sure, every team will lose a year if the lockout lasts, but I would argue that this year is particularly crucial for the Kings, given the age/development distribution of the team and its current contract structure. Aside from depriving the Kings of an immediate opportunity to defend the franchise's first Stanley Cup championship, losing 2012-13 would wipe out a prime year of their window.

In the aftermath of the Kings' Cup win, there was a lot of ink spilled about how the team was likely to remain strong for several coming seasons, due to a)the team's youth, and b)having its core locked down/returning the entire championship roster (which, as I'm sure none of us have forgotten, rolled over all opposition with startling ease). Jeff Angus, however, in The Lockout Hurts, Part I: Los Angeles Kings, made the following points:

One significant reason why the Kings were able to construct a team capable of winning it all – their roster boasts several cap friendly contracts. The two most important players to the dominant postseason performance were team captain Dustin Brown and goaltender Jonathan Quick. Brown (two years left at $3.175 million per season) and Quick (one season left at $1.8 million before a massive 10-year, $58 million extension kicks in) are also two of the best value players in the entire league.

Although the Kings are quite young ...[they] need to strike while the iron is hot. Veteran defensemen Willie Mitchell and Rob Scuderi have been significant additions, both on and off of the ice.

The Kings will have to reward their young players with big contracts in the coming years, and this means that they will have less cap space to make bold acquisitions like they have done in the past year with Mike Richards and Jeff Carter.

[the Kings] wouldn’t be able to use the lockout to the same benefit of many other NHL teams. They don't really have any young players on the verge of breaking out -- Voynov could be considered one, but many would say he had his breakout performance this past season.

I completely agree with him, and I think it's important to explore these ideas in further detail. Taking a closer look at the Kings' contract situation reveals that team management set things up quite well for the upcoming season. Losing the entire season, then, would be a major blow to the team's window of opportunity and future plans.

Nobody knows yet what the cap situation will look like going into the new CBA, but even without specific numbers to work with, there are some real areas of concern if the lockout drags on.

First of all, yes, the team will still be young, but it's been shown that a player's point per game peak lies between ages 24 and 26. The Kings would be losing a pretty important year from Anze Kopitar, who is far and away the team’s best scorer. Who here was excited to see what he would do in a full healthy season between Dustin Brown and Justin Williams, with the confidence of a championship under his belt, and fuelled by the desire to prove the title was no fluke? Not Gary Bettman or Don Fehr, apparently.

The team would also be losing essentially one of the last prime productive years of the Mike Richards, Jeff Carter, and Dustin Brown deals. I'm not suggesting that Richards, Carter, or Brown, are suddenly going to become terrible as they approach their thirties, or that they don't have value as players beyond the points they put up; I'm simply noting that history tells us that their points performance will slip significantly, soon. In the cases of Richards and Carter, teams sign these long-term deals to reap the benefits in the more productive early years, and losing one of them would suck. In the case of Brown, losing a year of his cheap sweetheart deal would suck especially.

On the blueline, the peak point production is less of a concern, but losing one of Willie Mitchell and Rob Scuderi's (again, statistically speaking) limited remaining years of effectiveness would be unfortunate. The Kings also have two young defencemen at fairly critical junctures in their development. Losing what would have been Slava Voynov's first full year of NHL duty, as well as the final year of Alec Martinez's ELC, would be tough breaks (not to mention the raise Martinez will probably require).[1] Similarly, one of the most thrilling aspects of Drew Doughty's career has been the ability to step up as a #1 defenceman years before most defencemen hit their peak -- that, too, would be delayed for a year.

In goal, it's a mixed bag. On one hand, Jonathan Quick's being given ample time to rehab his injured back. On the other hand, no season would mean that the Kings wouldn't benefit from the final year of Quick's current dirt-cheap contract. Even if you're a believer that he's worth every penny of his soon-to-be approximately $7 million salary (I remain skeptical), burning the last cheap year of one of the best contracts in the league – and the sweet, sweet cap space it provides – would hurt. A lot.

The same reasoning applies to Bernier: although he likely wouldn't command much of a raise, losing the last year of his contract would make things more difficult for the Kings. The young goalie wasn't dealt at the trade deadline last season because the Kings needed a solid backup to make a real playoff push even if Quick went down, and (likely) because the offers just weren't good enough. 2012-13 was supposed to be a season to take advantage of having such a cheap, quality goaltending tandem, showcasing Bernier for trade, and increasing his value before sending him elsewhere. Bernier might be keeping himself active plying his trade in the German second-tier league, but it's not exactly an ideal showcase for his abilities, and it certainly doesn't help out the Kings.

The other immediately obvious issue is the number of Kings reaching the end of their contracts in 2013: three UFA forwards, two UFA defensemen, two RFA forwards,[2] one RFA defenseman, and a RFA goalie – AKA, more than a third of the team. Again, lots of teams will have several players going into free agency. The more critical issue for the Kings is who is going UFA/RFA.

I won't get into any sort of numbers or cap space speculation, because a new CBA will render that all useless, but on a general level, take a look at this group: Simon Gagné, Dustin Penner, Brad Richardson, Kyle Clifford, and Trevor Lewis. "He struggled during the regular season, but he really elevated his performance in the playoffs to become a critical part of a championship team." To which of those players am I referring? You have no idea. (Well, not Clifford. Poor Clifford.) The Kings' excellent championship run involved a lot of players vastly out-playing their underwhelming regular season selves, to great results. Without additional data (i.e., another season), however, it also made the task of valuing players' next contracts more difficult. Throw in the fact that the 2011-12 Kings were essentially three different teams, with three very different success levels, and it becomes particularly complicated to sort out these players' true values going forward.

It's true that none of these players – other than maybe one of Gagné/Penner slotting into the top-6 – is part of the Kings' "core", and nine free agents isn't exactly an outrageous number. A quick scan of other teams' rosters reveals that at least a few of them will have a similar turnover to deal with, but those other teams won't have to deal with a valuation problem of this scope. Remember how many conflicting opinions there were re: Penner before (and after) he got his one-year, $3.25 million deal? It would be like that, except for a whole bunch of guys, and with the additional complication of what's likely to be a significantly altered salary cap structure. I believe that the Kings'; front office is smart enough not to make knee-jerk decisions based on small sample sizes, but this kind of valuation problem would still constitute a sizable hurdle for Dean Lombardi & co. if the lockout drags on.

Every team in the league will have to deal with the problems inherent to a cancelled season to some extent. But precisely because this Kings team was constructed so exceptionally well to take advantage of this upcoming season, the prospect of losing it hurts even more. Some of the effects of aging may be mitigated by skipping the rigours of a full season, and the Kings' front office has shown itself to be fairly proficient at handling cap issues. Still, the impact of these issues would be pretty significant if the 2012-13 season is cancelled, and I think it's important to keep them in mind when discussing what the Kings might lose, beyond a timely banner-raising ceremony.

__________
[1] Based on everything I've researched, the last year of Voynov's ELC would slide to the 2013-14 season because he is playing in the AHL and is not a locked-out player. Martinez, on the other hand, although also still on his ELC, is playing in the SM-Liiga because he qualified as a locked-out player, and therefore that last year would be lost.