One Year Later: Looking Back on the Hiring of Darryl Sutter

December 21, 2011: The Kings hold a press conference to announce the hiring of new head coach Darryl Sutter. We take a look back at his first year on the job.

Share All sharing options for: One Year Later: Looking Back on the Hiring of Darryl Sutter 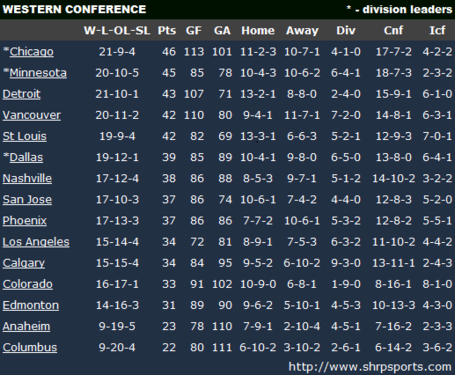 The Kings were in tenth place and the oft-quoted "five-year plan" for the Kings to contend was looking a bit shaky. Los Angeles had officially fired Terry Murray, and Dean Lombardi was on the hot seat. Trent Hunter was a King. Jeff Carter was not. Dwight King had played six career NHL games (the previous year) and looked completely overwhelmed doing it. Jordan Nolan was an afterthought. The Kings had the fewest goals per game in the league.

Traditionally, a period of uncertainty ensues after a head coach is shown the door. A number of candidates are considered, the fans get to speculate about who will fill the spot, and sexy coaching names are thrown around. Dean Lombardi and the Kings completely skipped all that. Unless you consider Darryl Sutter sexy, in which case, a single sexy name was thrown around.

Naturally, the media and fans made their own suggestions, so when it became clear that Dean only had eyes for the coach he once worked with in San Jose, the response was largely negative. Reactions ranged from "He went insane in Calgary!" to "This is more of the same!" to "Why does he always have the bitter-beer face?"

Of course, the season played out a lot differently than most expected. Some of the more significant moments of Sutter's year...

Sutter's focus after the break, unsurprisingly, was winning games. Via LA Kings Insider, he said this when he was asked about his goaltender usage plan:

"It’s about winning. We’re in a college schedule now, right? Thirty-two games. It’s about winning hockey games. We’ve got to make the playoffs. It doesn’t bother me who plays. It’s about winning games. You look at our schedule, and we’ve got seven back-to-backs, six of them are on the road. This one (stretch) breaks up into one game at home and six on the road. It’s easy to break our schedule up and look at it and say, `That’s a logical game for Quick, or that’s a logical game for Bernier,’ but now it’s about performance and winning games. It’s simple."

Quick would start 10 of the next 11 games, but the Kings would win just three of them.

And then, the playoffs. Sutter doesn't need to make many decisions about lines and goaltenders, but if his job was to keep the Kings hungry...well, mission accomplished. Again, Sutter keeps an even keel after winning and losing, and defers credit after defeating Phoenix to "the guys that sweat and bleed," the players. After Game 4 of the Stanley Cup Finals, a reporter asks why the Kings have had trouble closing after taking 3-0 leads in every series, and Sutter scoffs at him: "We lost Game 4 when we were up 3-0? Awesome." But as Game 6 winds down, Sutter does soak up the moment, and later discusses how going up 5-1 in Game 6 and seeing the players' faces is the highlight of his season.

June 15: Darryl Sutter, a man whose hiring was greeted with doubt and (in some cases) derision, receives perhaps the longest ovation at the Staples Center Cup rally. It's an indicator of the way in which Sutter has won over Los Angeles. But mostly, this was an excuse for me to relive the fist-pump. Oh, the fist-pump.

Was hiring Darryl Sutter the masterstroke that delivered the Stanley Cup to Los Angeles? I think that head coaches generally get too much credit for team success or failure, in all sports. And indeed, there are a number of compelling counterarguments to minimize Sutter's contribution, and they've certainly been discussed. There was the Carter trade and the call-ups of King and Nolan, Dustin Brown flipping the switch after not being traded, regression to the mean and improved possession stats, and of course, Jonathan Quick.

But the fans who watched the Kings in November saw a team that was, in essence, dead in the water. Dean Lombardi would tell you that Terry Murray doesn't deserve to be called a man who was holding the Kings back. But Lombardi's much-publicized chewing out of the players after Murray's dismissal shows that he knew the team wasn't giving their best, and the only option for Lombardi was to make a change.

One year later, you won't find a fan who'd argue that Lombardi made the wrong decision. Sutter showed good decision-making throughout the year, but his impact was even more essential in how the team responded to his style. Willie Mitchell was interviewed immediately after the Cup win by CBC, and he immediately credited Sutter with the team's turnaround: "Darryl came and made a change to the identity of the team, and we started to play some good hockey late in the year...we all started to get our confidence and feel good and get on a run.""

So, happy anniversary, Darryl Sutter. The traditional first anniversary gift is paper, but I'm not sure we can get him anything better than the silver he brought home in June. 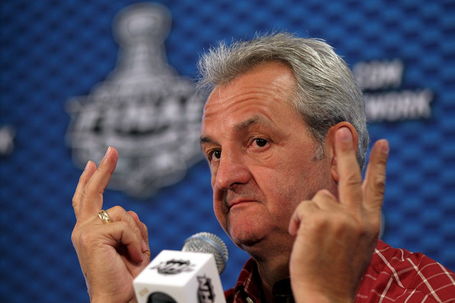