Kings-Blackhawks Preview: A Few Notes On The Kings' Defense

Share All sharing options for: Kings-Blackhawks Preview: A Few Notes On The Kings' Defense

Since we last met the Chicago Blackhawks...

OUT: Jonathan Toews is still recovering, though close to return. Steve Montador (concussion), Dan Carcillo (ACL), and Sami Lepisto (leg) are also out.

In net: Emery over Crawford.

The big story of the Wings game was defensive breakdowns. I can't remember being pissed off at the final four minutes of any game since...well, a year ago.

That shouldn't make us forget, however, that the Kings have been so excellent at hanging onto one-goal leads all season, and that the defense has been solid on the whole. After the Johnson trade, now is a good time to look at the different assignments each defenseman gets.

For level of competition, I used Corsi Rel. QoC. The higher the number, the tougher the opponents.

O-zone start percentage tells us how often a player is sent out for faceoffs in the offensive versus the defensive zone. (Shutdown defensemen like Greene typically have a low o-zone percentage; puckmovers generally get more opportunities.) 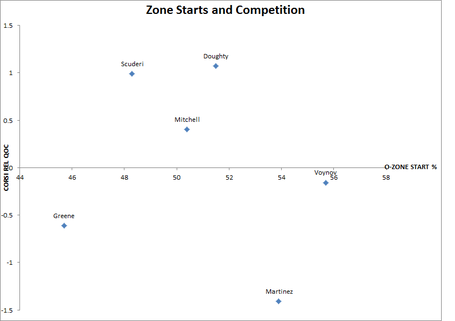 -Drew Doughty takes on the toughest opponents at even strength, followed by his partner Scuderi. Mitchell's position comes from having split time as the partner of both Voynov and Doughty.

-Doughty's tough assignments allow the team to shelter Voynov and Martinez. Both benefit from facing easier opponents, as well as being sent out for fewer defensive-zone faceoffs.

-Before the trade, Johnson was fourth in competition (near Mitchell), and had similar zone starts to Doughty. As Voynov gains experience, he should eventually be trusted more often in those situations.

-All three of our young puckmovers have very good plus-minus for shots, even after adjusting for zone-starts.

In short, whatever our frustrations may be after a bad game, we should remember that we have the makings of a great defensive corps, one that we can expect to improve with time and hard-won experience. They've tweaked the system looking for balance. Hesitation, miscues, fatigue, and plain old mistakes can happen. The only thing left to do is to turn the page, and build on it.

They enter this game with a tough row to hoe against Chicago, but a win would put the Kings right back in the mix for a playoff spot. Can they balance offense and defense, aggression and discipline? Whatever happens, I'm looking for a hell of fight.