The Kings are riding high after a stunning 3 game win streak to start the playoffs against the President's Trophy winning Canucks. But not all is rosy for the Kings heading into Game 4. Puck possession numbers in Game 3 were extremely lopsided in Vancouver's favor. That being said, despite getting dominated in Corsi, the Kings were able to actually win the scoring chance battle 13-9.
Even though the Canucks were limited in quality shots it is not preferable for them to have the puck as much as they did in Game 3.
As indicated in an earlier post, the Kings edged the Canucks 55% to 45% (Zone Adjusted Corsi) in the season series.
Let's take a look at what contributed to the dramatic shift in possession numbers after the chart: 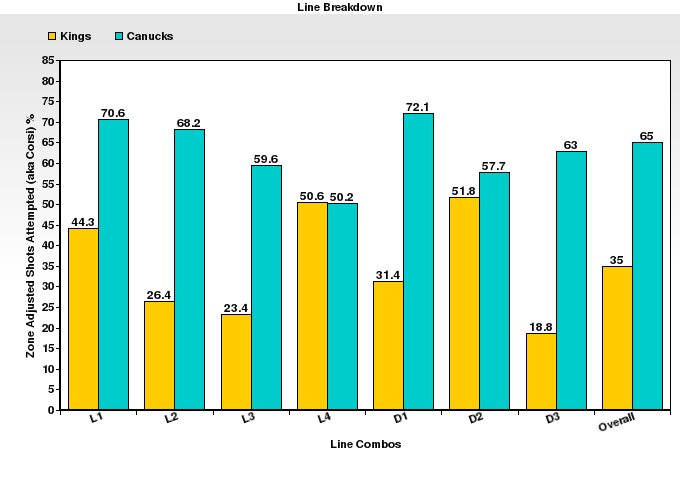 The Canucks have been able to increase their puck possession edge as the series wears on. How have they been able to do this? Adjustments. After Game 1 Alain Vigneault shifted his lines and matchups.

Since Game 1 he has switched Raymond and Lapierre out of the top 6 and promoted Higgins and Hansen. He decided to sacrifice balance in order to add all of his most skilled players into the top 6. In conjunction with this he switched Pahlsson off Kopitar after a dominant Game 1 by the Kings top line. This worked well in Game 2 as he matched Kesler against Kopitar which led to a suppression in shot attempts.

It is interesting then that despite having home ice the Kings chose to not exploit the Pahlsson line with Kopitar. Instead they stuck with the top 6 v top 6 strategy that Vigneault was hoping to exploit in Game 2 (for more on this click HERE, a great article by Canucks Army).

One major key to this strategy is the 3rd line battle. Vancouver is sacrifing depth in order to try to win the top 6 matchups. One would then think that this would leave their third line exposed to the Stoll line which had played well down the stretch. Not the case last night as the Pahlsson line dominated the matchup.

One explanation for the Kings not going with Kopitar/ Pahlsson in Game 3 is injuries. The 4th line has been depleted by injuries to Clifford and Loktionov, thus forcing Sutter to give Penner and King more minutes overall. More minutes overall, plus more minutes against Sedin was a risk that Sutter was unwilling to take. He went the conservative route in giving Kopitar the Sedin matchup instead of more time against the much softer Pahlsson match-up. This was effective in keeping the game close and limiting Vancouver's scoring chances while sacrificing puck possession.

The Stoll line though (as well as the Green/Martinez pairing) will need to reassess a few things after getting dominated in Game 3 in spite of relatively softer matchups.

An overlooked bright spot for the Kings in Game 3 was Voynov. He played 8 minutes versus Henrik, was on the ice for the Kings goal, and a +4 in Corsi. He was the only Kings defenseman to score positively in Corsi. The team overall was -30. Also on the King's scoring play, he kept the play alive with a superbly timed pinch which allowed them to keep possession and lead to the goal.

Now there is news that Daniel Sedin has flown to LA and will practice with the team tomorrow. If he goes in Game 4 it will be interesting to see how the Kings react.

Also what do the Kings do if Loktionov can't go in Game 4? Dress Westgarth? Dress 7 defensemen? Call up help from Manch? What would you do and how would you set up and deploy your lines in Game 4?