The first game of the Kings-Blues Conference Semifinal was the close checking match everyone had expected. The Kings walked away with the victory and yet again proved to be a force to be reckoned with in the 2012 playoffs. Many media outlets have highlighted Jonathan Quick's eye-popping saves early in the game (with good reason) along with Alex Pietrangelo's injury brought upon by a Dwight King boarding infraction. Yet, there were other factors involved that led to the King's victory. Their defense cut down on quality opportunities and the Blues net presence, their forwards were able take control the puck, and the Blues' took some poorly timed penalties.

Highlights after the jump...

The Blues controlled the action early in the first with strong puck management and net presence. It finally payed off on David Perron's goal:
Interesting to note on this goal that it was one of the very few shifts that the Backes and Stoll lines (as well as Martinez-Greene) found themselves on the ice at the same time.
Soon after the Kings seemingly woke up and tightened the shot differential (and won the Corsi battle overall 42-35) leading to Slava Voynov's late period pancake goal:

The 1st period ended with shot differentials being even, yet the Blues seemed to have the more quality chances: 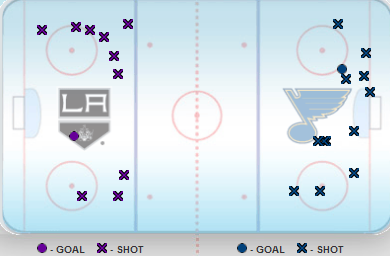 The 2nd period was the most physical of the game. The Kings changed the tone and kept the Blues away from the net while also taking control of the puck. The Kings physicality also led to the biggest controversy of the game, Dwight King's hit on Alex Pietrangelo:

Pietrangelo came back to play one shift and left the game for good and is feared to be concussed. Things went from bad to worse for the Blues as their ensuing Power Play lead to this:

It was only the 2nd shorthanded goal by a King's defenseman ever in the playoffs (the other was by Rob Blake in the '93 cup run). That series of events made the headlines but what went unnoticed was how the Kings were able to keep the front of the net completely clear for Quick in the 2nd as their still unheralded defensive corps took control of the crease: 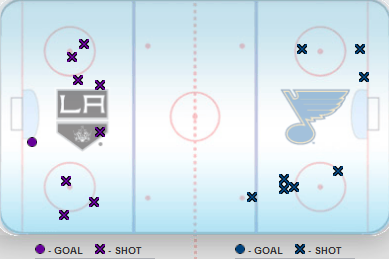 The 3rd saw the Blues lose their composure as they spent nearly half the period in the box. They did manage to keep themselves in the game by not allowing a PP marker while blocking a number of shots (23 total). Dustin Penner though ended the game with a EN bank shot and the Kings as a result now reap the reward of holding home-ice advantage in the series.

Big questions surrounding King's hit remain. Will Alex Pietrangelo be available for Game 2? He was not at practice today and remains questionable.

The Kings maintain that there should be no supplemental discipline from the league. Darryl Sutter even went as far as to say that it was "as much as Pietrangelo's own fault".

As Niesy highlighted in a previous post, supplemental discipline seems unlikely. Still though that brings about an interesting situation should King be suspended. Do the Kings then insert Clifford into the lineup as he attempts to make his way back from a concussion or do they try Loktionov who performed very well as a fill in while Richardson was out with appendicitis? It is debatable which of the two matchup better against the Blues.

What would you do?