The Western Conference finals will begin Sunday at 5 p.m. Pacific in Phoenix, so let's begin our round of previews.

Robert will be bringing us detailed breakdowns of the LA-PHX rosters and their previous games against each other in the regular season. For now, let's begin by taking a look at their regular season performances overall.

The 2011-12 Kings were a team in transition. As we noted before the playoffs began, the firing of Murray and the Carter/Johnson trade both marked improvements in the Kings' overall shot differential: 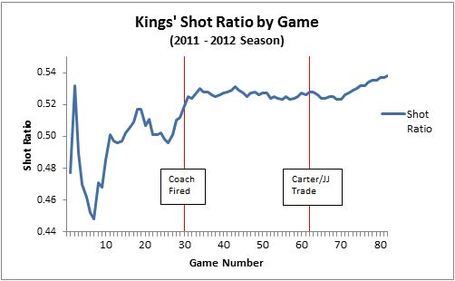 Why do we care about shot ratios?

Just ask Darryl Sutter: puck possession is important. You want your players to have the puck. You want to spend more time attacking than defending. Great teams like Detroit are famous for controlling most of the play. In the long run, you’re more likely to score goals and win games that way. The ‘ice feels tilted.’

Corsi (named for Jim Corsi of the Buffalo Sabres) adds up shots on goal, missed shots, and blocked shots at even strength. Fenwick is similar, except it only counts shots that get through the defense (blocked shots are taken out). We can use shot attempts to get a rough estimate how often a team was in the offensive zone overall.

The importance of zone time and possession is something just about everyone can agree on.

Eric T. pointed out that no team was hotter than LA down the stretch in this regard. Their scoring also picked up significantly during the same period. The Kings began the season as an average possession team, but finished "scary good." And that's how they made the playoffs.

Now let's compare the two teams by looking at their regular season shot attempt percentage when the score was close (tied or within two goals before the third period). Teams change their strategies when they are trailing by a significant amount or trying to protect a lead, so this gives us a good picture of how effective teams are at even strength. 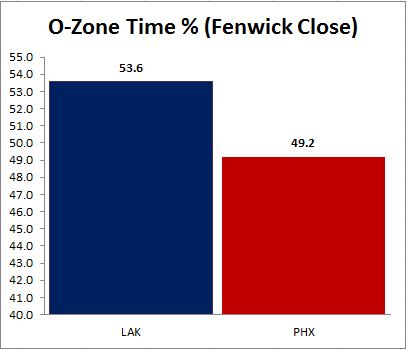 The good news is that the Kings were the better team at possession over the course of the season. However, we should note that this is no guarantee of victory in a short four to seven game series.

Teams like Nashville and Phoenix rely on goaltending and defense to carry them through rather than shot volume. The Coyotes were out-shot heavily in the first two rounds, giving up an average of 36 shots against per game, yet they're still standing. They are excellent at collapsing around the net and using their speed to mount a counter-attack. It helps that Mike Smith has stopped 94.8% of all shots he has faced.

However, the new-look Kings should be able to place the Coyotes under an extraordinary amount of pressure. They have not faced each other since Johnson was shipped out. Doughty, Voynov, and Martinez are mobile and effective at jumping up into the play. They also have a netminder capable of matching Smith in goal: Jonathan Quick has stopped 94.9% of shots in the postseason. All in all, it's shaping up to be a terrific battle.

Next up, Robert begins his overview of PHX-LA. We'll also do a more detailed breakdown of the goaltenders. Stay tuned!