Since we last "outplayed the Phoenix Coyotes in every facet of the game" (thanks Dave!).....

OUT: I haven't read anywhere who would come out of the lineup for Aucoin, who's a game-time decision, but I'm assuming it will probably be David Schlemko because he's terrible

So that top line had a pretty good Game 1, pretty much carrying the team as Robert detailed. But you don't need #fancystats to figure that out. Even Shane Doan, who I'm going to assume is probably an idiot, figured it out:

See, Kings fans, the Kopitar line was dominant because the Coyotes forgot they should defend them. Or something. Let's hope this Buy 1 Scoring Chance, Get 1 Free promotion continues tonight.

So the Los Angeles Kings are 9-1 in the 2012 playoffs. Even someone who hates math (PHWA members, relax there won't be a quiz later) could tell you that translates to a .900 winning percentage. That's pretty good, I think. They're also 1 road win away from tying an NHL record for consecutive road wins. All good stuff.

You'd think all of this means our local news team could, you know, maybe not confuse our logo with that of a largely irrelevant basketball team. 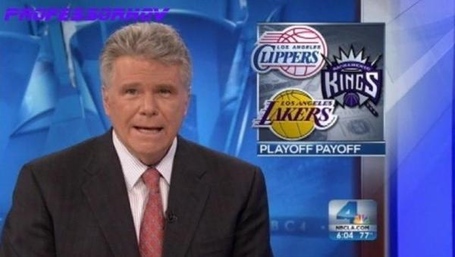 Thanks for that cold water to the face, NBC LA. "Just in case you were momentarily thinking your hockey team's monumental success might be changing perceptions in your local market, HAHAHA NEVERMIND. YOU GUYS STILL DON'T MATTER. BASKETBALL!"

How'd the Lakers do in Game 1, by the way? Just curious.

So partially in honor of our lack of respect, and partially because my initial idea for this preview failed miserably, I figured I'd spell out the word RESPECT with various things the Kings have done so far in these playoffs, as well as what they can do to make sure they win Game 2.

Remember when Dustin was all "I don't know if you guys heard, but I used to be a good hockey player." to the Vancouver media? That was funny. Dude is funny, and he's scoring. What more could you ask for? I mean other than maybe doing it in the regular season too I guess.

E is for Energy
Everyone talks about having a 4th line that will "provide good energy". Usually what they mean by this is "well, they can't actually play the game of ice hockey very well, so hopefully in their 2 minutes of ice-time they'll hit some dudes and only get scored on 2 or 3 times." On the other hand, the Kings 4th line in its various incarnations has actually been effective throughout the playoffs. They've managed to bring that "energy" without being laughably bad, to the point where Darryl Sutter has felt more than comfortable rolling 4 lines throughout the majority of the games. Hurray for (actual) energy!

S is for Slava
Since this is, after all, Jewels From the Crown, I would be remiss in not mentioning our favorite young Russian defenseman. Yes, he's looked jittery in his own end at times, but he's a rookie in the playoffs. I'd still take jittery Slava over a "poised, calm" Jack Johnson, wouldn't you? You're nodding right now, unless you're Craig Button, too busy drooling all over his own chin to nod. Anyway, he made a beautiful outlet pass to spring Dustin Brown on the game-winning goal on Sunday. Thumbs-up, Slava!

P is for Positioning
The Coyotes scored their second (and final) goal of Game 1 with a near-perfect forecheck that caught the Kings out of defensive positioning. I would submit to you this stood out because LA's positioning in their defensive zone has been damn near perfect throughout the 2012 playoffs. Vancouver, St. Louis, and Phoenix all struggled mightily at times to get anything even resembling a forecheck going, because LA has been amazing at clearing the puck out extremely quickly. Of course, that is helped immensely by no longer having a human black hole playing defense. Alright I'll stop picking on Jack Johnson; it's so easy though!

E is for Ekman-Larsson
I'm sure this kid is going to be really good someday, but boy did he get eaten alive in Game 1. Take a look at Robert's fancy graphs if you don't believe me. Given how unbelievably awful he was against the Kopitar line, it's hard to imagine Dave Tippett going back to that match-up again in Game 2. So one of the keys to the game may end up being how well the Richards line (and maybe even the Stoll line) can continue pounding the poor kid into submission.

C is for Crappy
As in "boy, the Coyotes sure played crappy in Game 1!". Hard to imagine they play that badly again. How do the Kings, and especially Jonathan Quick (who may have had his first bad game of the playoffs in Game 1; yeah, he made some saves in the third, but you simply cannot let in goals from center-ice, sorry), respond if the Coyotes have a much better Game 2? History so far says that this team will be up to the challenge.

T is for Timing
Timing is everything in life, and the Kings are proving that by peaking at the exact right time. I will never get tired of writing this: 9-1 in the 2012 Stanley Cup Playoffs, 6-game winning streak overall, 6-0 on the road, and an 8-game road winning streak dating back to last season. Folks, this team is really, really good. According to the Vegas odds they're the current favorites to win the Stanley Cup. At this point, no one gives a damn what seed the Kings started with, because they've been elite when it mattered the most. They've made believers out of virtually everyone. Don't want to take my word for it? Here's some smarter dudes:

Kings are the best eighth seed ever... there I said it.

@67sound @mirtle I just don't see how any of the remaining teams are beating them without both .960 goaltending + a 25% PP.

And Drance picked the Kings to beat the Canucks in Round 1, and has a Twitter background from Turbo: A Power Rangers Movie, so you know he's a smart dude.

ANYWAY. So all that spells RESPECT, something LA has already earned and will continue to earn, starting tonight. So next time, pick the logo that doesn't say "Sacramento" and have a giant basketball in it, okay NBC LA? Appreciate it.