For our series preview of each round of the playoffs, we have taken an in depth look at puck possession and what strategies coaches have been using in managing their lines. We'll continue that tradition into the Stanley Cup Final.

First, if you're new to this stuff, read this primer by Niesy on why puck possession matters.

To start, we'll look at the broad overview of how players have been used in the playoffs and what the results have been. We'll do that using player usage charts. We can see at a glance which players have been sent out for a high ratio of defensive zone faceoffs, and also the competition they've faced compared to their teammates. (Usage charts are the brainchild of Rob Vollman. You can download the full NHL regular season spreadsheet here.)

The big red dots mean a player is doing great at possession (+Corsi relative to his teammates). The big white dots means he is doing not so great (-Corsi relative to teammates). The more they're on the left, the more they've been put in defensive situations and on the right, offensive situations. The further north, the harder the competition they've faced, and softer competition to the South. There is also a more in depth explanation about the charts in the spreadsheet itself under the "About" tab. 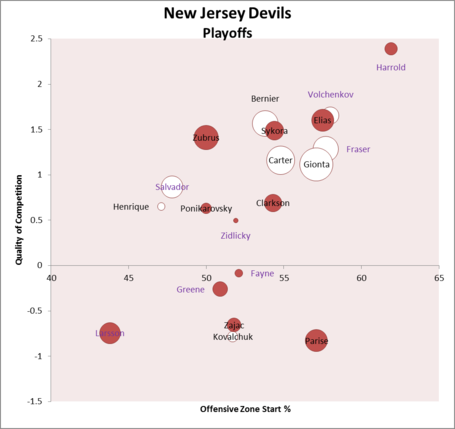 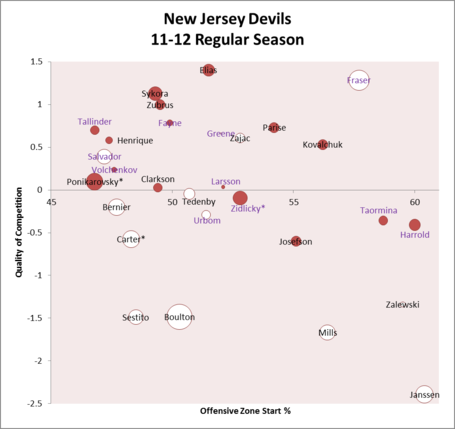 The Devils do quite a bit of line shuffling, so we'll just pick some key forwards out and make some observations. 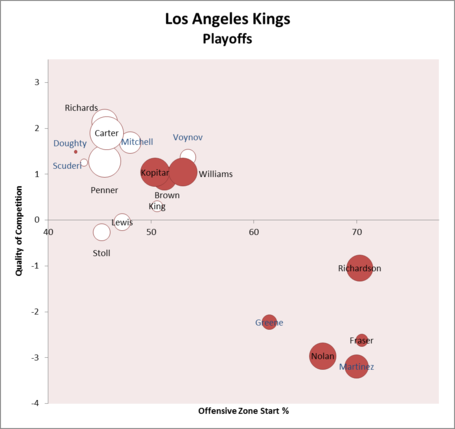 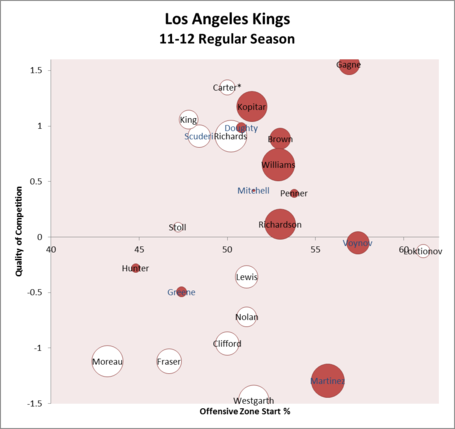 The Kings' playoff usage chart is a sight to behold. You can easily recognize the simplicity and effectiveness of their playoff strategy. They give their top players the most difficult minutes and their depth players the easiest, with no middle ground.

Please post any observations you have that I might of missed in the comments. Also, as always, if you have any questions or need clarification about any of this stuff, please feel free to fire away. Don't be shy. We love introducing people to this.

We'll have a couple more parts to this preview before Wednesday, so keep an eye out!