In our last part of the preview we looked at how the Devils deploy their lines against their opponents. This may give us a glimpse as to what to expect on Wednesday night.

Now we'll turn our attention to the way the Kings have deployed their lines. We'll make a few brief observations, but won't attempt to make any predictions based on this. That is because by the time the series shifts to LA, matchups will probably be more affected by whatever happens in New Jersey rather than whatever the Kings have done thus far in the playoffs. This chart will mainly be most useful in conjunction with the upcoming possession part of our preview, along with using it as a reference when breaking down games in the Final to use as a point of comparison. Nevertheless, it does reveal a few unexpected trends in Darryl Sutter's line matching strategy. 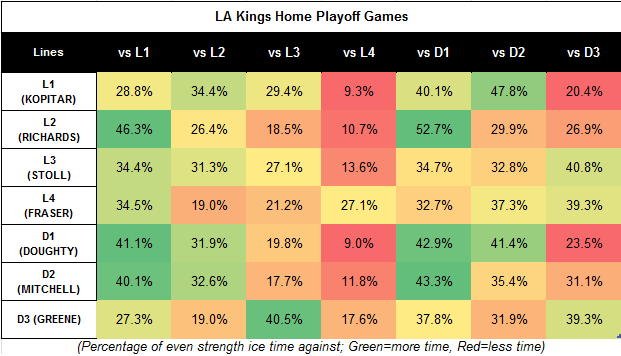 If anything jumps out at you from these charts that I might have missed, please feel free to comment.
For our next part of the Preview we'll take a closer look at possession results for each team in the playoffs.

Previous entries in the series: Part 1 (Bubbles!) and Part 2 (How has NJ approached matchups?).