In our previous two parts of our Stanley Cup preview, we took a look at how each team liked to use their lines. Now we'll shift our focus to possession.

The way we measure possession is by adding up shots on goal, missed shots, and blocked shots at even strength. It's been shown that attempting a lot of shots has a heavy correlation to controlling the puck in your opponent's end (as well as with scoring chances and winning). This measure is commonly known as "Corsi" (named after the man who invented it, the longtime goaltending coach of the Buffalo Sabres, Jim Corsi).

We then adjust it for zone starts, which helps compensate for where a player starts his shift (players that start in the defensive zone have a tougher job). It helps us get a clearer picture.

We convert these numbers into percentages which makes them easier to swallow. Anything above 50% means that you are generating more shots than your opponents when you are on the ice. Anything below and you're losing the battle.

Now onto the chart: 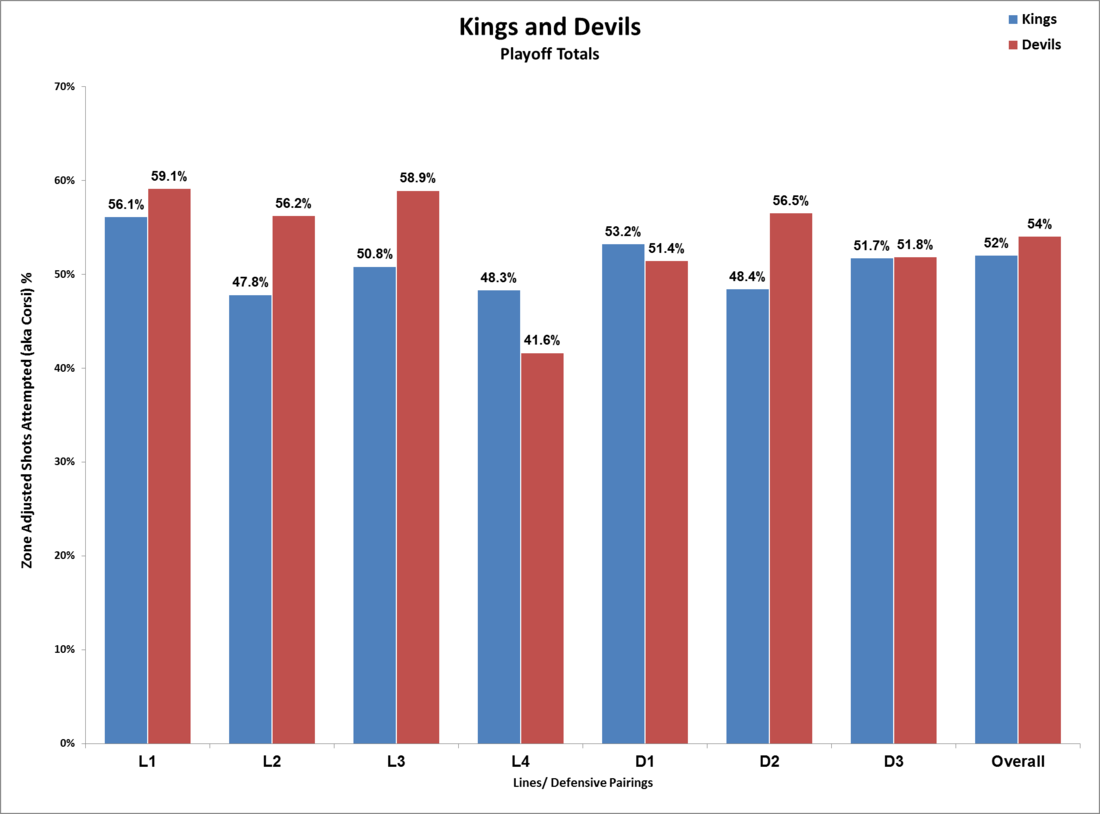 Overall the Devils have ended up with slightly better numbers, 54% to 52%. The numbers even up a bit though when you consider that the Kings played tougher competition in Vancouver and St. Louis. Also, the Kings were playing with the lead a lot and teams that are trying to come from behind have higher shot rates. There are much more interesting results though when looking at forward lines and defensive pairings. 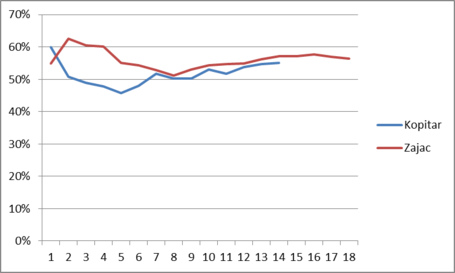 These numbers serve to temper any inklings of an easy victory for the Kings in the final. The Devils are an underrated, formidable opponent. Both teams possession numbers since the Carter trade (a popular benchmark as a turning point in the Kings season) are incredibly strong. Since that trade, the Kings had a 58% Corsi rating in the regular season and 52% in the playoffs. In that time the Devils had a 53% rating in the regular season and a 55% (non-zone adjusted) rating in the playoffs. The Kings have been slightly better but the difference is not vast by any stretch. This should be a very close series and we'll continue to track possession and line-matching as the it progresses to see where any edges are being gained.

As always please feel free to ask any questions or express any desires for clarity. We know this stuff can be a little dense for those that are unfamiliar, so don't be shy. We love introducing people to this.