There’s nothing wrong with going after a big dog, but in most cases, the best free agents are the ones that fit.

We obviously strive for big names. Certainly last year we went really hard. Quite frankly though, the problem is that there’s not a lot of big names every year.

This year, the big dog is Zach Parise. Alex Semin is also a pretty sizable dog, but presumably not as big (though we'll have more on Semin in a future post). Not only is Parise a big name, he would also be a fit for the Kings as they are going to need to add some depth at wing this offseason--especially on the left side--one way or another.

The Kings do have the cap flexibility to make a run for him. They are $16MM under the projected cap. That figure, of course, could lower significantly once there is a new CBA (to around $9MM at the lowest). If they found themselves over the cap by the time a new CBA is reached (due to re-signing Jonathan Quick), they could make some moves to get under (moving Brad Richardson, Matt Greene, or Rob Scuderi all comes to mind). That said, Parise will still be quite expensive. It’s been rumored that the Wild are prepared to offer him the Moon.

While it’s difficult to see the Kings out-offering Minnesota, it’s not beyond reason to think that Parise would take a little less to come play for the Stanley Cup Champs. If it happened, their roster next year could look something like this: 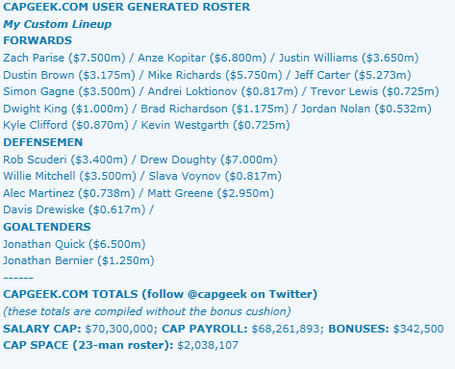 This is made even more malleable when you consider that the Kings cap space the following year would free up to somewhere around 11mm (depending on CBA and RFA contracts) with Gagne and Scuderi coming off the books.

The next question then would be; is Parise worth it?

If the Kings do sign Parise, then the man that Kopitar out-muscled and out-skated to the puck to score that goal above in the Stanley Cup Final could be getting paid more money than their #1C. This, of course, is only a superficial way of looking at it. Let’s take a more in depth approach.

The first thing to consider is that Parise will get an extremely long term contract. He will be 28 next year, and many think this means he is entering his prime years. Unfortunately, by NHL standards, he is already over the hill for a sniper.

In addition, his production dropped significantly this season after coming back from a torn meniscus that saw him miss nearly the entire 10-11 season. His point total this past season was his lowest full season total since 07-08 and his possession numbers were the lowest of his career. In fact, Parise has only once been a top ten scorer in the NHL at even strength and that came in 08-09.

His numbers suffered even while being paired with Ilya Kovalchuk, who had a bounceback year (37 goals and 46 assists). Kovalchuk has never been a great possession player, however, which might explain the drag on Parise’s numbers. But as ILWT points out, Kovalchuk actually had better numbers without Parise than with him.

Parise would give the Kings quite a formidable top 6 over the short term, and also provide some much needed help on the power play. He is a big name (an American one, even) who would create even more buzz for a team that is coming off its first championship. It is not very often that someone of Parise’s age and talent becomes available on the free agent market. And the Kings could always use more scoring on the left side.

There is no doubt that whoever signs Parise will be overpaying. The question for the Kings would be: is it worth it to overpay because he increases the chances of winning the Cup again, long term plans be damned?