Rankings among Kings defensemen who appeared in at least 40 games. 6 qualified.

Each stat header features a clickable link that takes you to a brief explanation.


At 33, Rob Scuderi averaged more ice time this past season than he has at any point in his NHL career. He saw top minutes this year being paired with Drew Doughty as opposed to last season when he was on the second pair with Jack Johnson.

He took the 2nd fewest penalties on the team among defensemen while also being relied upon to play a heavily physical game and starting most of his shifts in the defensive zone. He was also an effective penalty killer, allowing the fewest shot attempts against among penalty killing defensemen on the team.

As has been noted several times, Johnson bleeds shot attempts no matter who he is paired with and is a drag on his teammates' possession numbers whenever he is on the ice. This season, when Scuderi was paired with Johnson his possession rate was 43%. With Drew Doughty it was 56%. A 13% differential.

One thing this tells us is that Scuderi is usually at the mercy of who his defensive partner is. He is not expected to drive play or be relied upon as a puck mover. His job is that of a safety net in the defensive zone. When he does have the puck, he is expected to get it to his partner as soon as possible and let them drive the play up ice.

That being said in that role he was very effective. He was not a drag on Doughty's numbers in spite of his limitations as a puck mover. Doughty's possession rate with Scuderi was 56% and about the same without him--57%. This is indicative that Scuderi knows his role and does it well. He is a positionally sound defensive defenseman who can play physically without taking penalties. He does not get in the way of moving the play forward despite his offensive limitations.

These numbers are made all the more impressive when you look at how he was used. Scuderi faced the 2nd most difficult competition of any defenseman on the team, while also playing in the second most difficult zone start situations. In this role he was able to keep his possession numbers above water and take nearly the fewest penalties of anybody on the team. He carried that role into the playoffs and was similarly effective.

Another interesting note is that he set a career high in shots on goal this season. While he took shots the furthest out from anyone on the team, he was actually quite successful at getting shots on net:

Percentage of Shots on Net

Scuderi really shined on the penalty kill. Among the four Kings penalty killing defenseman he gave up the fewest shot attempts:

He didn't see as many minutes as Mitchell or Greene but when he was out there he was more than effective.

At a $3.4m cap hit, Scuderi is not much of a burden upon the Kings salary cap situation. Still, are the Kings getting value out of his contract? Let's take a look at how he compares to some defenseman who are close in age and getting paid a similar amount: 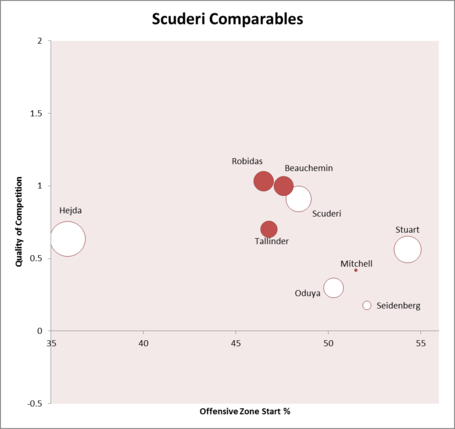 Scuderi did everything that was expected of him this past season and was an integral part of the club. He is a solid defensive defenseman who does little to hurt his team and excels on the penalty kill. That being said, his performance at even strength couldn't be characterized as exceptional in any aspect. In our book he gets a solid B.