In a Different Place: Making Sense of the Kings' 2012 Playoff Run

Share All sharing options for: In a Different Place: Making Sense of the Kings' 2012 Playoff Run

Many have been at a loss to explain the Los Angeles Kings' turnaround this post-season. They had been winning games at a record setting pace, blowing through every opponent in their way, and are now one win away from their first Stanley Cup in franchise history.

The Kings' defense and goaltending have been consistently great for them all year long. Jonathan Quick is a frontrunner for the Vezina trophy, and the Kings' defense gave up the second fewest goals in the league. The main area where the team struggled was putting pucks in the net. 42 games into the season, the team had a 5.6% shooting percentage--the worst in the league.

Things had begun rather promising for L.A. Coming off back-to-back playoff berths after years of drought, they'd made some key offseason acquisitions. They brought Mike Richards and Simon Gagne into the fold to add to their young and still-improving core. Many picked them to compete for the Stanley Cup.

The Kings got off to a hot start, and seemed to be living up to the preseason hype. Under the surface though, all was not rosy. The Kings were vastly overperforming in goal production despite being consistently out-shot by their opponents. It all soon crashed to Earth, and Terry Murray was the first casualty.

Under Murray, the Kings were a middle-of-the-road possession team. In close games, they were breaking even at driving the play in their opponents' end. In addition, most of their forwards were on pace for career lows in goal production.

The season had turned into a nightmare. The Kings were playing boring hockey and were trying to win games 1-0. A single goal by the opposition felt like instant death.

After Murray's firing, the team spent a few games under the watch of assistant coach John Stevens while they waited for Darryl Sutter to take the reins. Few saw things getting any better once he did; despair had begun to set in among the fanbase.

Things did get better, though. The team's shot differentials, which had begun to improve right before Murray's firing, had begun to soar after: 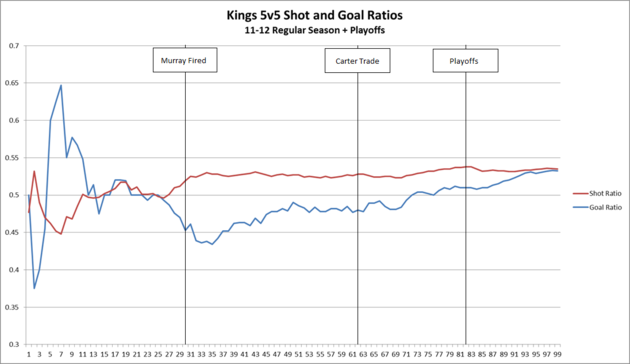 The team was still struggling to score but their goal differential was slowly improving, albeit at an excruciatingly slow pace. Dean Lombardi, at the time probably fighting for his job, grew impatient and pulled off the biggest trade of the season. He sent young, popular defenseman Jack Johnson and a conditional first round pick to the Blue Jackets for Jeff Carter. Soon after, team shooting percentage (which had stagnated below 6%) began to soar as well:

Slowly but surely, the team's goal rate began to catch up to their shot rate (which had been flying high since the Murray firing). As soon as the playoffs started, the King's fortunes began to turn: 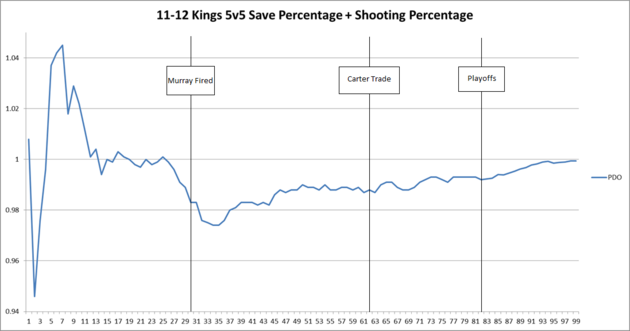 Save percentage + shooting percentage (also known as "PDO") is a way of measuring how variance impacts hockey teams. This number always regresses heavily to the mean of 1.000. In the short run, these percentages are driven by chance and can be all over the map.

As the season stretches on, the number tends to normalize. If your team is well above 1.000 you can expect them to come down to Earth at some point (see this past season's Minnesota Wild); under 1.000, and you can expect some bounces to start going their way eventually. The latter is what describes the Kings' season.

Some have noted how inflated the Kings' PDO is in the playoffs, and how they're 'just riding a wave of luck.' These people are not taking into account the season as a whole. The Kings' "luck" is correcting itself.

But it wasn't all luck: the Kings made some key moves that made them better beyond the Sutter hiring and the Carter trade. Jordan Nolan and Dwight King were added while veteran fill-ins Ethan Moreau and Trent Hunter were shipped out. In addition, Drew Doughty healed up and started to play like the Drew Doughty of old after injury and contract drama had hampered him in the early going.

Stung by bad luck and under-performance, the Kings saw the flaws in their roster and endeavored to fix them. They succeeded, and ended up weighing the coin heavily in their favor. They just needed to flip it enough times to start seeing success.

*Thanks to Behindthenet.ca for some of the data.