Have You Had Your CBA Today? CBA Links and Notes

Share All sharing options for: Have You Had Your CBA Today? CBA Links and Notes

How are your parents? Yeah? Ha. Good for them.

Hey, I write here now. Well, "write" is such a silly term. How about hang out, do the kids still say that? Loiter? Okay, I loiter here now. I know most of you, some of you I don’t know. We’ll get to know each other. You and I, we’re not so different. Just give it a chance, man.

How about some CBA news! That’s "Collective Bargaining Agreement" for you laypeople. Labor talks, yo. Maybe your knowledge on the ins and outs of the current/past CBA is limited. But it’s okay. We’re going to learn together. Take, for example, yesterday.

Yesterday was a doozy. News leaked of the league's first proposals, and they were...ambitious. Gary Bettman be straight trippin’, nawwww mean!

Let's take a tour through some links. 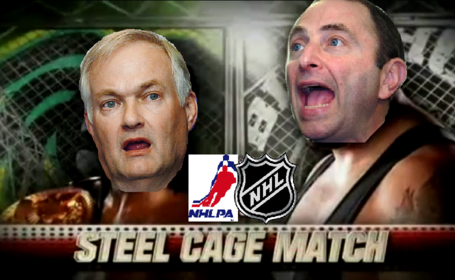 Background, for those of you confused about what's going on

CBC: NHLPA ready to start CBA talks as soon as next week

An article from a few weeks ago, but kind of sets up the characters of this dog and pony show we call collective bargaining. Now with 100% more Donald Fehr, who you may remember led the MLBPA through a fun strike in 1994 that cancelled the World Series…hey, but he also grew up real close to me, only, like, eighty years earlier.

Puck Daddy: What's really at stake for NHLPA in collective bargaining with NHL

"The Player" returns to Puck Daddy. He talks about the NHL bringing the players’ share of hockey related revenues down to fifty percent. Will that happen? Continue to find out!

Yesterday, we heard about the league's first offer. And…Renaud Lavoie of RDS spoke of a bleak future with no NHL. I’ll just let these paragraphs tell you the story:

According to the report, the league's initial offer would reduce the players hockey related revenue from 57 percent all the way down to 46 percent, which would amount to a pretty massive paycut (11 percent) for the players.

Among the other key parts of the offer, per Lavoie on Twitter: players would need to play 10 years in the NHL before being eligible for free agency, contracts would be limited to five years, no more salary arbitration, and entry level contracts would be five years instead of the current three years.

Hurry, children! Into the fallout shelter!

This scientific graph shows the consequences of such a decrease in hockey related revenues of the players, and it doesn’t look good. 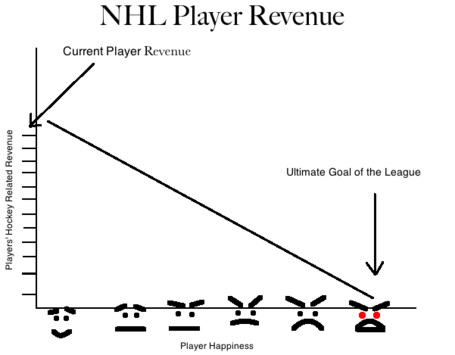 Dirk Hoag from On the Forecheck has everything you need to know about the owners’ proposal. The reduction of player revenue shares, ten years to unrestricted free agency, five year contract limits, the end of salary arbitration, and five year entry level contracts are all explained in depth. If you don’t read anything else from this post PLEASE READ THIS.

Michael Russo breaks down what the League wants all in a nice little package. He also says it’s important to not overreact, so quit looting that Lexus dealership.

Twitter reactions to the news are not so encouraging. Hockey writers can be so pessimistic. It’s not like lockouts happen all the time!

Do you guys have any articles or links you find interesting? If so, you know the drill. Post them in the comments.

For reals, I am honored to be a part of the team here. Niesy, John, Robert, all of you guys and gals in the comments, you are what make this hockey community great. You guys were great before the success of the team, and that means you have character or something. I don’t know, I’m not much for speeches. And defrim65, you are great too, but come back, we miss you.