In his 2nd NHL season, Kyle Clifford played in almost every regular season game. In the playoffs though, he was injured and became a regular scratch even after he healed up.

We'll take a brief look at his 11-12 season and what we might expect next year. 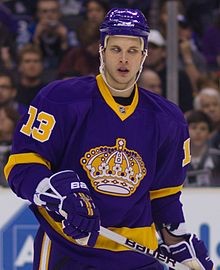 Clifford’s possession numbers are very low when compared to the rest of the team. Still though when compared to some other players of his ilk on the squad (Westgarth, Fraser, Moreau), his numbers are more encouraging. Among those players listed above he was the only one that had the play going the right way when he was on the ice. Still one would like to see Clifford improve in this area especially in light of the revelations of Jordan Nolan and Dwight King. Both of whom’s production may send Clifford on to being a healthy scratch more often than not. You have to wonder if Clifford might have benefitted in his development from spening a few years in the AHL and earning more playing time.

Clifford needs to get a little better at driving the play in order to stave off becoming a one-dimensional player. He certainly has the ability to do so, but will he be able able to develop given his limited minutes and possibly riding the pine more often in 12-13?