There Are No Winners In The CBA Game

Share All sharing options for: There Are No Winners In The CBA Game 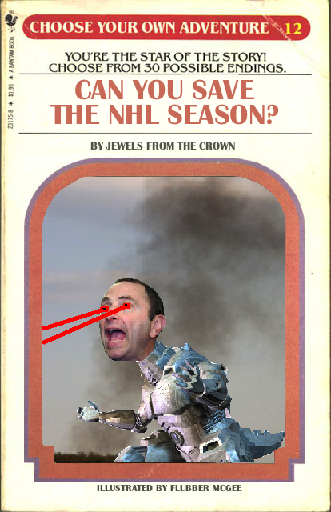 Are you worrying that you won't see NHL hockey this season? Well, worry no more! You can relax with the knowledge that the season probably will not get under way in time, and we will indeed have a lockout of some undetermined length. Whew! Good thing we cleared that up.

Remember Choose Your Own Adventure books, where you control what happens in the story? If so, you came to the right place. Today you will get a chance to take the role as a Big Market Owner, a Small Market Owner, or a player and do your best to avoid a work stoppage by making the right decisions. And no, it doesn't count if you keep your thumb on the previous page. You read it, you chose it. Sound like fun? Sure it does. That's just the kind of ground we are breaking here at JFTC.

Of course, it's all fiction, but whatever. You are merely a pawn in the game of hockey. Bask for a while in the illusion of control.

Can you avoid a lockout? Jump to find out. But be warned, nobody truly wins. You just don't lose as bad in some cases.

Congratulations, you are the owner of the Philadelphia Flyers! You have a lot of influence over League operations. Your organization – along with about ten other franchises – contributes a major percentage to the overall financial health of the league.

You, more than your Small Market peers, would like to see the players' share of the Hockey Related Revenues reduced, leaving them with the brunt of any and all shared League revenues. You also would like salary arbitration eliminated, and contracts limited to five years. This, in turn, does not force you to offer a long, risky deal (i.e. Kovalchuk, et al.), leaving you with the necessary funds to sign other low-risk contracts.

Your Small Market peers and the players you employ would like you to "share" your revenue with the whole league. You aren't too keen.

You like controlling things, and tell Mr. Bettman it's your way or the highway. Go to Page 4.

You are willing to make a deal that works for both sides of owners. Go to Page 7.

Congratulations, you are the owner of the Columbus Blue Jackets. You do not have much influence in league affairs, but you manage your budget well and do not operate with any losses.

You prefer greater revenue sharing among each team in the League. "Spread the wealth," that's what you always say. You would like to see player salaries rollbacks and a cut in the salary cap. This will allow you greater competition in the free agent market, and ensure you can retain any potential free agents.

If you are dead set in your ways, and wish to propose this to the Big Market Owners and the League, go to Page 5.

If you wish to align with the Big Market Owners, and solidify your alliance moving forward, go to Page 8.

You are an NHL player, beloved by thousands, sometimes even hundreds of thousands. You are also a member of the NHLPA negotiating committee.

Your union hopes for greater revenue sharing among each team. This ensures you will get a fair offer from any team you play for, and the burden of covering the sharing of revenues does not ultimately fall on you. You also do not like having money taken out of your paycheck. Therefore, you view revenue sharing as a means to help the poorer organizations while holding them accountable at the same time.

You receive a counter-proposal from the League and begin the negotiation process. Go to Page 6.

You feel your sides' proposal will stabilize the League, and do not wish to see it changed much, if at all. Go to Page 9.

Think again. Your Small Market companions would like you to reconsider. Not only that, the Players Union side with the Small Market Owners on this issue. So, you risk losing the support of your fellow owners, making your side in negotiations appear disorganized and shambolic.

What's better, losing a season worth of revenues, or sharing that revenue to maintain labor peace?

Acquiesce to the Small Market owners' demands? Go to Page 10.

The Big Market Owners laugh in your face, and rightly so. They see you as someone trying to take money out of their pockets. But, hey, everyone has to do their part to ensure the well-being of the League, right?

You were willing to take the NHLPA's initial proposal, but the Big Market Owners will have no part of it. Sure, they want salary rollbacks, but you cannot seem to persuade them to think your way.

You feel compelled to side with the Big Market owners, but do you? If so, go to Page 11.

If you wish to take a hard-line stance, and fight for a proposal similar to the one presented by the NHLPA, go to Page 13.

The League offers you little in the way of negotiations, and you get the impression the Big Market Owners control the League's proposal. That means no revenue sharing, and you are stuck with the original 46 percent HRR proposal. Or you could just play in the DEL this season and not worry about such matters.

The owners attempt to drag out the process until you blink. Again. Sorry owners, not this time. You attempt to lobby the Small Market Owners to make a last second plea to their wealthy peers. Go to Page 13.

You agree that some form of revenue sharing is needed to maintain the steady stream of revenue you currently enjoy. Of course, you will put some of that money into the proverbial League bank account. By doing this, though, you are taking on the brunt of the combined shared revenues. Essentially, it will be your combined gate and television revenues bailing out the League.

You still see that revenue sharing and salary rollbacks appear to be the best option, plus you don't want to be blamed for a lockout. Go to Page 10.

The Big Market Owners control the discussion, and wish for you to see things their way. You know what they want, and that they usually get it, so you don't argue with them.

"Yessir. Yessir. Whatever you say sir." Know your role, and shut your mouth on Page 11.

Have an independent thought and fight for your beliefs. Go to Page 13.

This happens. Now you have two weeks to figure out some kind of consensus, or risk losing potential salary, or a job.

You back off of your revenue sharing requests in order to get the season started by the time training camp starts. Go to Page 12.

You want to play, but Europe/Russia is always an option (unless you are Alex Ovechkin). Go to Page 13.

Hooray! You have avoided a lockout, but now must turn over part of your revenue for the benefit of the League. You also lose the ability to outspend the small market teams with crazy contract lengths. The media will say you conceded a lot in this deal and you appear weak and suggestible. But hey, no lockout. Now, would you be interested in purchasing a case of Comfort Wipes?

You avoid a lockout, but at what cost?

As it turns out, the new CBA implements a form of revenue sharing, but not what the players – or you – wanted. The Big Market Owners agree to a rollback of salaries, but contract lengths and other small matters go untouched for now.

Your life is a bit easier as you can compete in the player acquisition market. Your organization also qualifies as a dependent of the League, therefore you receive additional revenues each year. You are financially better off, but enjoy this time while you have it. The next CBA may not be so kind.

What's worse, once you, or your fellow Small Marketers begin to struggle financially, it will be difficult to rebound. The other owners will wonder why they have to pay your operating losses. You become the New World Order Coyotes.

You avoid a lockout, but you lose a battle with the owners for the second time in about six years. You lose some amount of your immediate salary as a result of rollbacks, and miss an opportunity to make serious changes to the way teams spend money.

But look on the bright side: You do not miss a season of your career. Anddd that's about it. Better luck next time!

Your proposal fails, resulting in a lockout. You lose.

The real losers are the fans, of course, but you know who isn't a bunch of losers. The Los Angeles Kings. The Kings won the Stanley Cup!!! They are winners. They are better than most people. Do you remember this, or this, and this, this, this, or this and this? This?

Remember when the Kings were the best team in the world? They are, at this moment in time, right now. This bargaining mess will pass. The 2011-12 Kings will live on forever. Yay!

If there is a lockout that delays the beginning of the season, let me propose a four hour reunion of the team at the Staples Center on October 12th, featuring live music performances, circus animals, fireworks, free booze, highlights of the Stanley Cup run, a bouncy castle, and a guarantee that all fans in attendance will receive a t-shirt shot out of a cannon, culminating in the raising of the Kings Stanley Cup Champions banner and the unveiling of a gold statue on the roof depicting Bob Miller, Nick Nickson, Darryl Evans, and Jim Fox holding hands and gamboling through a meadow. Yeah...they should totally do that.