Hall of Awesome: Scapegoat to Hero, The Dustin Brown Story

Share All sharing options for: Hall of Awesome: Scapegoat to Hero, The Dustin Brown Story

This past season's trade deadline was Monday, February 27th. On February 23rd, the Los Angeles Kings acquired Jeff Carter in a trade with the Columbus Blue Jackets for Jack Johnson and a first round pick. By the morning of February 24th, the Kings reportedly had their captain – Dustin Brown – on the trade block.

It could have been because his team was fourth in the Pacific Division, tied for ninth in the Western Conference, two points out of a playoff spot, 2-6-2 in their last ten games, was the worst goal scoring team in the league, and they had run out of their season allotment of head coaches to fire. A team with such high hopes, with little to show for it.

That Saturday – the 25th – saw an early evening game at Staples Center of the Los Angeles Kings and the Chicago Blackhawks. Jeff Carter's first game as a King, reunited with his friend from the Flyers, Mike Richards. Also the first game with their captain supposedly on the trade block.

Then a bunch of crazy stuff happened.

The Kings would win this particular game with the help of a Dustin Brown hat-trick. Still, the question remained as to whether or not this would be his last game as a King?

Depending on your frame of mind, this outburst will either help the Kings get what they want should they shop Brown or its (sic) evidence that he needs to stay in Los Angeles. Either way, if this ends up being Brown's last game in a Kings' uniform, then he will be leaving on a high note.

"I've been a King my whole career and I expect to be a King beyond the next few days...It's my responsibility to prepare myself the best I can and tonight felt good."

Fun fact: He also had the flu that week.

We all know how the story ends. The 27th would come and go, and Brown remained captain of the Kings. In fact, including this game, the Kings would go 13-5-3 to finish the season. This would be enough for the eighth seed in the Western Conference. Brown would score eight goals and record fifteen assists during that twenty-one game stretch, having only scored fourteen goals and seventeen assists in the sixty-one games prior. Draw the conclusions you want from this one insignificant game, but it really means nothing. Just ask Dustin yourself.

"Whether those rumors are true or not, they're still out there, it gives you maybe a bit more motivation...Not that if there would not have been any trade rumors I wouldn't have had a hat trick that night, but you definitely get a chip on your shoulder when you hear something like that."

That said, the most memorable thing you can take away from this game is that it ended early in the evening and there was ample time to go out gallivanting afterwards. Crazy kids.

Oh yeah, after the regular season the Kings would go 16-4 in the Stanley Cup Playoffs, or something. I don't really know... the regular season has always seemed more exciting and a better measure of a team's true talent. Oh, by the way, Brown had eight goals – including three game winners – and twelve assists, totaling twenty points. That was good enough to top all players in the playoffs except teammate Anze Kopitar who tied him in every category. But, y'know, it's whatever. Kopitar is only superhuman.

Moral of the story: Never underestimate Dean Lombardi ever, EVER, again. You have been warned. 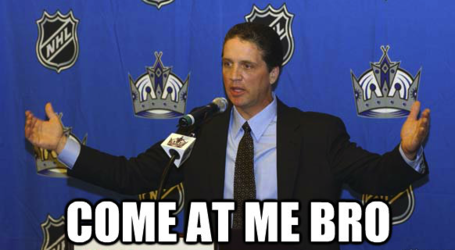