After letting an early 3-0 lead slip away, Jeff Carter scores his second power play goal of the night to beat Ottawa in overtime. Dustin Brown scores the other two goals for LA.

Share All sharing options for: Kings-Senators Recap: Carter's Second Wins It in OT, 4-3

The Los Angeles Kings scored three times on the man advantage, and once with a guy straight out of the penalty box. And after failing to close out the Ottawa Senators in regulation, they needed every one of those four goals. Jeff Carter's game-winner earned two points (and a huge sigh of relief) for the Kings.

Three goals off of penalties in the first period. Good stuff, Kings! But the first wasn't on a power play; it was after Dustin Brown's penalty was killed off by LA. Bobby Ryan took a wild slap shot as the penalty expired, and it went all the way around the boards and down the ice to Brownas he dashed out of the box. Brown picked the puck up on the far side in stride, and his wrist shot beat Craig Anderson. Brown didn't have much of an angle, so it was either a really nice shot or a bad goal for Anderson to allow. Maybe both.

The second and third goals were extremely similar. Sequence: Ottawa takes a penalty. Justin Williams draws a second penalty on the power play, forcing a 5-on-3. The Senators scramble and survive the two-man advantage, but before the guy in the box can help the penalty kill, LA scores. Repeat. The first goal was Jeff Carter's; after a few attempts at goal left Craig Anderson sprawled on the ice, Mike Richards fed Carter, who put the puck high over Anderson to make it 2-0. Five minutes later, it was Brown again; this time, Carter got the puck in the corner, faked a move, and slid a perfect pass to the slot for Brown to jam home. 3-0, and the Kings were sitting pretty.

The Kings started to get themselves in trouble in the second period, and were victimized by a failure to clear the puck. Let's look at what happened, shall we? 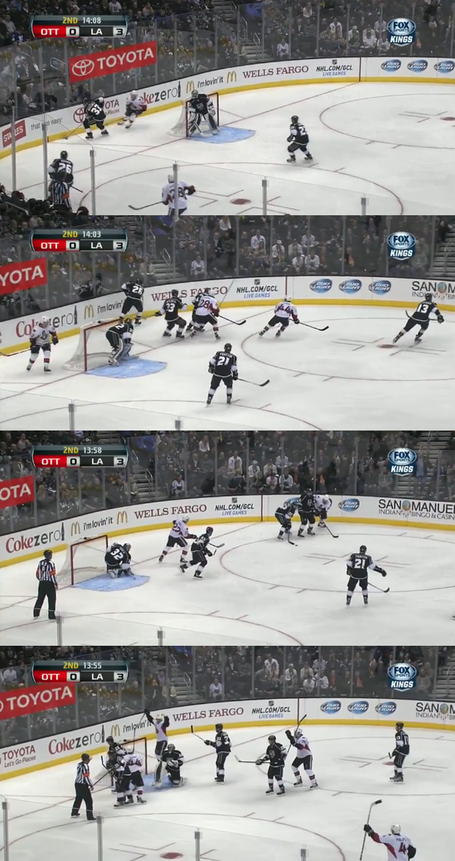 That's Willie Mitchell, Slava Voynov, and Trevor Lewis all with opportunities to clear the puck. And that last frame is after Jean-Gabriel Pageau picked up the (still-not-cleared) puck and fired a wrist shot which squeezed past Jonathan Quick. The less said about that, the better. The rest of the second period wasn't exactly fun, but the Kings did a very good job of limiting Ottawa chances and maintained their 3-1 lead. Both teams also stayed out of the box.

For six minutes, LA was well on their way to playing a good, solid, lead-preserving third period. (I think I actually said that out loud at the time.) They picked up the first seven shots of the final frame, with Kyle Clifford nearly beating Craig Anderson on the seventh. All was going according to plan. Then, Dustin Brown went to the box for interference, and the Senators needed just eight seconds to find the back of the net through Bobby Ryan . The chorus of boos at Staples was audible, but the grumbling of the fans was louder; we had a bad feeling about this. The Senators picked up the pace, but Los Angeles held the fort until there were about five minutes left.

To add insult to injury, Ottawa tied things up after Jonathan Quick 's finest save of the evening. The Senators ended a power play with an odd-man rush, and after an initial save, Quick went post-to-post and stuck out his blocker to deny a rebound off the stick of Stephane de Costa. He's good at making those kind of saves. Unfortunately, he's not so good at making saves when he doesn't see the puck, and the defense made sure he never saw Ottawa's equalizer. After Joe "I can't believe he got an assist for that" Corvo flung a backhander in the general direction of the net, a mad scramble took place in the high slot. The Kings' fourth line, along with Doughty and Regehr, all attempted to get to the puck, but Milan Michalek was the only one who could corral it. Quick had no chance on Michalek's high wrister.

The Kings' chances looked pretty grim after blowing a three-goal lead, but the Senators threw them a lifeline late in regulation. Drew Doughty, who's had his struggles of late, drew a hooking penalty with a nice move along the boards, and though LA couldn't win the game in regulation, they ended things early in overtime. With Doughty, Kopitar, Richards, and Carter on the ice (decent 4-on-3 unit there), the Kings cycled until Richards got the puck at the point with just a couple seconds left on the penalty. Richards' shot traveled along the ice, and Carter tipped the puck right over the glove of Anderson. Game.

Allowing a Western Conference opponent to get a point after being down 3-0 would be immensely frustrating, but this early in the season, it fortunately doesn't affect the Kings. Also good: the defense (featuring Alec Martinez, of course) was improved and Quick played a decent game in net. Just a reminder that, hey, you should do a better job of holding onto leads.