Kings-Coyotes Recap: Dwight King and the Centers Help LA Win a Wild One

Kopitar, Richards, and Frattin get their first goals of the season, but the real star of the show was Dwight King. The Kings needed the offense, as they blew a 4-0 lead but recovered to win 7-4.

Share All sharing options for: Kings-Coyotes Recap: Dwight King and the Centers Help LA Win a Wild One

One minute in, this was going to be remembered as the night Anze Kopitar broke his slump.

Twenty minutes in, this was going to be remembered as the night the Los Angeles Kings destroyed Mike Smith and the Phoenix Coyotes.

Forty-three minutes in, this was going to be remembered as the night the Kings blew a four-goal lead to Phoenix.

When the game finally ended, the night belonged to Dwight King. His empty-netter finished off LA's best offensive effort of the season, a 7-4 win over the Coyotes.

I guess the solution to Anze Kopitar's slump (in goals only, mind you) was an opening-minute power play, and Antoine Vermette was happy to oblige by holding... Dwight King! Seconds into the power play, Kopitar drove to the net and was stopped by Mike Smith, who also stoned Dustin Brown on the rebound. But the saves had taken him out of position, and when Justin Williams knocked the puck away from Smith, Kopitar picked it up and fired into the open net for an early 1-0 lead. Kopitar would also add two assists, because come on, like he was just gonna stop doing that once he scored? (note: 15 seconds before this goal happened, fellow writer Nick said, "I hope Kopitar goes scoreless this season and gets 100 assists.")

You can read about (and watch) Dwight King's two first period goals here; these bookended a rare fourth-line goal to put the Kings in control early. Colin Fraser (who is looking a lot better than he did earlier this season) and Jordan Nolan (who has cemented his place in the lineup) led a 2-on-1 and played it perfectly. Fraser kept the puck and took a shot to the far side, and all Smith could do was make a pad save. The rebound went straight to Nolan as he charged down the middle, and he converted. That made the score 3-0, and King's deflection of a Robyn Regehr slapper made it 4-0. Curtains for Mike Smith after the first; to add insult to injury, he'd get his empty-net thunder stolen later. As much as it pains me to say it: none of that was Mike Smith's fault. LA dominated the first, outshooting the Coyotes 15-5 and doing most of their work at (gasp) even strength.

Everyone did their job in the first. LA continued to control the game in the second, but Phoenix would roar back after the ten-minute mark. The first goal was unlucky for all involved on our end, as a big deflection on the shot from the top corner of the zone by Zbynek Michalek went straight to former King Jeff Halpern, who tapped in for the easiest goal of his life. (Curse you, Moulson Index!) The second was on Jonathan Quick. After a good-looking Kings power play went for naught, Martin Hanzal picked up the puck behind the net and banked it in off of Quick's back. Quick left about a foot of space between himself and the post, making that type of goal possible.

LA survived the rest of the second, making us think that the worst may have passed. The Kings responded by giving up their two-goal lead in three minutes. A nervous crowd got more nervous after Willie Mitchell's second high-sticking penalty of the game gave Phoenix a power play, and Keith Yandle's point shot was deflected in by Martin Hanzal 1:51 into the third. The game would be tied less than one minute later, after the inevitable Shane Doan goal. This one was an innocent-looking shot which got through a ton of traffic and beat Quick. Bob Miller exclaimed "Do you believe this?!", to which a bunch of Kings fans responded... "Yes."

Jake Muzzin took his second bad penalty a minute later, breaking Vermette's stick with a slash. But as Kings fans dreaded the worst, Mike Richards did what he does best: made a play while shorthanded. Radim Vrbata got a drop pass and tried to move past Richards at center ice, but Richards knocked it free and got himself a breakaway. He went straight to the backhand, patiently waited as Thomas Greiss stretched his leg, and found space between the pad and the post for a shorthanded goal. His first of the season made it 5-4, and relief swept over the Staples Center.

As if Kopitar and Richards opening their 2013-14 accounts wasn't good enough, new arrival Matt Frattin got in on the action! Frattin has been a lot more aggressive in terms of hitting and going to the net lately, and though he hasn't been perfect, he deserved his first goal last night. Jeff Carter fed the puck to Drew Doughty, who took a shot from the right circle as Frattin casually drifted into the shooting lane. Frattin's tip beat Greiss on the short side, and with eight minutes to go, LA was in good shape. Just as Phoenix was threatening late, Shane Doan's late penalty killed their momentum, and Dwight King's empty-netter sealed his hat trick and a Kings win.

A largely dominant performance by the Kings' offense, but man, we need to work on holding leads. At any rate, it was good to see some offense, and a lot of players staked claims to a lineup spot tonight. Maybe Martinez or Ellerby gets a look in place of Muzzin, and maybe Clifford goes back in for Carcillo, but everyone else did good work overall. Grades to come; expect a decent one for Dwight King. We always believed in him. 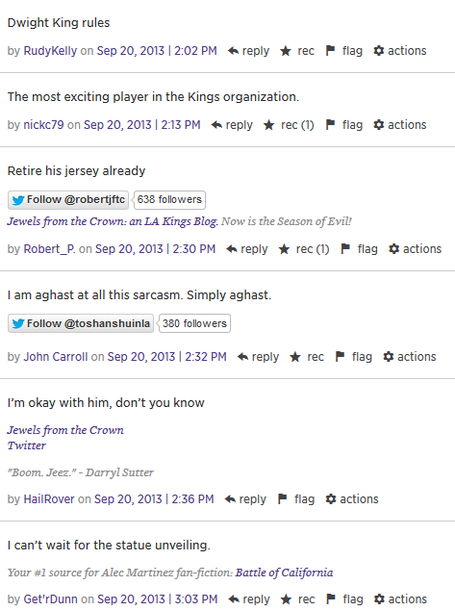