Big news out of the Kingsternet this morning.

According to Jon Hoven of Mayor's Manor the Kings have both Tyler Toffoli and Linden Vey on their way to Los Angeles:

To make room for Toffoli and Very, #LAKings have put Ellerby on waivers and a top-6 forward is going on IR. You won't be happy.

Bigger Kings news: Told that Jeff Carter is out with a lower body injury and is expected to go on IR.

We posted earlier in the week about a roster move coming on the horizon and that Ellerby could be waived if the Kings couldn't find a suitable trade. It looks like that was the case.

No word yet on the severity of the injury Jeff Carter sustained or how much time he'll miss. Having Carter out of the roster could be a big blow for a Kings team that has struggled to score goals this season. Carter's 5 goals on the year tie him with Justin Williams for the team lead.

UPDATE: According to LA Kings Insider Jon Rosen, Anze Kopitar said Carter showed up today in a boot. The boot may be indicative of a foot or ankle injury. 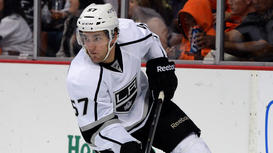 Linden Vey has been very strong for Manchester having registered 11 points in 10 games. We recently profiled him on our Top 25 Under 25 series.

Tyler Toffoli leads all Kings prospects in NHL equivalencies so far this season. He also saw a lot of time with the Kings last year and played very well.

Keaton Ellerby had yet to see any playing time this season as the Kings 8th defenseman. He saw a lot of time last season and had his efforts praised by Darryl Sutter. It's unlikely that Ellerby goes through waivers unclaimed. Update: Ellerby has been claimed by the Jets.

UPDATE: Darryl Sutter expressed some displeasure at how the news of Carter's injury was revealed-- "No one told me about it. If you got that from someone in the organization that is disappointing":

We'll keep you updated with more as news comes in.

In the meantime, this brings up some very intriguing potential line combinations. I think my favorite at the moment is:

What lineup do you want to see tomorrow night against Nashville?