Slava Voynov developed fast, but what does he need to do to take the next step?

Slava Voynov was the Kings 2nd round pick (32nd overall) in the 2008 draft. Before being drafted, there were questions as to whether or not he would be willing to come overseas and play in North America rather than choosing to stay in Russia. If he'd decided on staying, he could've commanded a hefty contract and would have started making big money sooner rather than later. Dean Lombardi was confident that he'd come over and snapped him up early in the 2nd round.

Here’s what TSN had to say about him at the time he was drafted (by way of Rich Hammond):

“The Russian defenceman is one of the chief agitators in the draft, an in your face type of guy who doesn’t back off an inch. When most of his Russian teammates threw in the towel against Canada in the Summit Series last fall, Voinov played every shift of every game as if it mattered. The Russian factor will come into play on how high he goes, but it wouldn’t be outlandish if a team toyed with the idea of taking him late in the first round. Chances are, though, that he’ll go in the second.”

Voynov developed fast and saw his first NHL game in ’11-12 at 21 after spending three years with the Manchester Monarchs. That was also the year the Kings won the Stanley Cup. This was not a coincidence, as the rapid development of Slava Voynov allowed the Kings to feel comfortable in moving Jack Johnson in a trade for Jeff Carter. Johnson was a notorious anchor on the team’s possession numbers and Carter gave them a scoring punch that they sorely lacked. Voynov provided impressively solid two way play for a 21 year old and he’s been a regular in the line-up ever since.

In fact, Voynov had some of the best possession numbers among defenseman over the span of his career entering this season and he’s been solid again this year. His numbers have no doubt been helped by playing on an incredibly strong possession team, but taking a look at the effect he’s had on his teammates' possession numbers over his career sheds more light on his contributions. 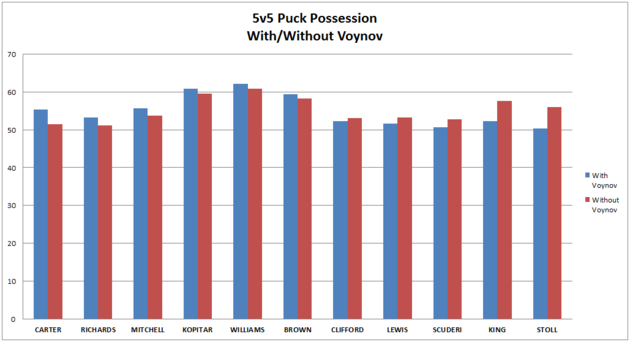 What this chart shows is that Voynov has had a positive impact on top 6 six forwards, while bottom 6 forwards have done better without him. So basically he’s been a great compliment to the Kings higher tier players, but hasn’t really been able to provide a boost to the bottom 6 like Doughty has.

Voynov has been an undoubtedly solid defenseman for the Kings over the last 3 seasons, but perhaps the next step for him to take to become an elite defenseman would be to help drive play even when playing with less offensively minded players.

Even if he never develops into an elite defenseman, although keep in mind that he is only 23 years old, the Kings have themselves a truly gifted backender in Voynov. One who will be patrolling the ice for L.A. for years and years to come.