Holy crap, Doughty's been dominant. Who else moves around in this week's power rankings?

Had a really bad turnover yesterday in overtime. That's the one thing he's done wrong in, like, a month.

Take a look at what Drew Doughty has done the last two games. Just look at it. 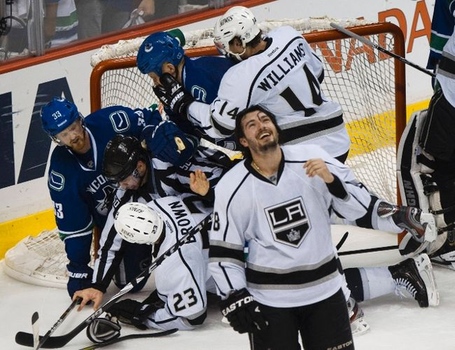 Williams is scoring goals at his highest rate since 2006. Though he stole one from Kopitar yesterday. Selfish.

Check out Nick's quarter-season review to see how much better he's been this season.

Almost broke a franchise record for shutout streak. Allowed two goals on 15 shots last night, and it was technically his worst start of the season. He's got another month or so to keep this up.

[His +/- luck] won't last, but neither will his scoring drought now that he's back on the top line.

A assist last game! A goal the game before! HE'S BACK, BABY!

On track for a Jeff Carter-esque goals to assists ratio (3.5:1). Not a bad thing.

Mitchell-Martinez (comparatively) struggled this past week. The penalty kill has been good, though.

Also gets a boost from the Kings' PK success. TOP TEN!

He and Regehr have put together some strong performances overall. Robert wrote more about him here.

As the scoring dropped off this past week, so did his ice time. Let's see what he's got in the tank.

Darryl Sutter's playing mind games, and he's slowed down offensively, but he's still getting time on the penalty kill.

Up and down. Hit the post against the Rangers; that's the closest he's come to a point in two weeks.

Clinging onto that lineup spot and not doing too badly with it.

It was beginning to look like Pearson was over his head, but he has had a couple decent games. Still the favorite for demotion once Carter or Clifford gets back.

Followed up a very good week with a highly inactive week. Did this to Peter Harrold, though.

Agree? Disagree? Tell us how you'd change the rankings.