Ben Scrivens and Semyon Varlamov match zeros for three periods, and it takes a deflection off of Jarret Stoll for the Avalanche to earn the 1-0 win in overtime.

The Los Angeles Kings' possession-dominating offense took a night off Saturday against the Colorado Avalanche. Thankfully, Ben Scrivens was back on his game. To the recap...

The first period was the Kings' best, but it wasn't really a surprise to see it go scoreless. Darryl Sutter was clearly concerned by the Kings' one goal against New Jersey and not appeased by the shot domination, and he was dealing with another couple of injuries to Matt Frattin and Trevor Lewis. So he shuffled the top lines. Here's what we saw, as shown by Left Wing Lock:

Kyle Clifford made his return to the lineup after his injury, and Colin Fraser slotted in due to the new forward injuries. Clifford was pretty effective, Fraser was pretty invisible in limited minutes.

Semyon Varlamov was the best Av early on, as he resisted a good-looking Kings power play and foiled an Anze Kopitar wraparound. (Yes, Kopitar beat defenders around the net and created a scoring chance. I'm surprised too.) Varlamov also had to act quickly after Drew Doughty went coast-to-coast and his deflected shot went straight to Mike Richards. It's worth noting he got plenty of help from his defense, who blocked nine shots in the first. At the other end, Scrivens provided a heads-up poke check on Ryan O'Reilly, but the rest of his period was rather dull.

The second period, as usual, consisted of one team getting crazily outshot but no one scoring; however, for once it was the Kings who had the ice tilted against them. The Avs picked up 16 shots and dominated the scoring chance battle, but Ben Scrivens was superb in net when called to action. He made four good saves on Paul Stastny in six minutes and helped kill off a penalty to Robyn Regehr. In general, he was able to showcase his particular brand of goaltending quite often. For example, the Kings committed a brutal neutral zone turnover to give Patrick Bordeleau a good look streaking down the ice, but Scrivens came way out of the net and held onto the shot. He also made a great save on Maxime Talbot near the end of the frame, coming across the crease to stop the tap-in.

Scrivens would save his best stretch of play for the latter stretch of the third, but it wouldn't have been so crucial if the Kings had been able to generate some offense. Even a four-minute power play earned with a minute left in the second (after John Mitchell high-sticked his long-lost brother Willie) resulted in just two shots and no real threats to open the scoring. The Avalanche dominated the final two periods in attempted shots (Corsi), and dominated even more when you remove blocked shots from consideration (Fenwick, shown in the chart below from Extra Skater). 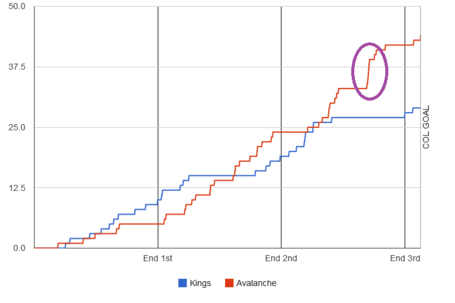 That flat red line in the third is the four-minute power play. The flat blue line soon after was the final 12 minutes of the third; aside from an Alec Martinez missed shot with two seconds to go in regulation, the Kings got nothing in the direction of Semyon Varlamov. (Those 12 minutes came after the Kings' best chance of the night, when Slava Voynov got to the net and Dustin Brown put the puck in after Varlamov had covered up and gotten a whistle.) The incredibly steep red line circled on the graph? That's what happened when Willie Mitchell took a high-sticking penalty of his own and Colorado got six shots in 30 seconds. And Scrivens was utterly fantastic. Just watch:

The reason the Kings even earned a point tonight was Ben Scrivens. That save on Nathan MacKinnon might have been the best save Scrivens has made all season. Unfortunately, once the game got to overtime, Scrivens was finally beaten... by Jarret Stoll. Kopitar whiffed on a shot, leading to a 3-on-2 the other way. The Avs moved the puck well coming in, and John Mitchell set up a one-timer for Jamie McGinn . Scrivens made the save, but the rebound banked off of Jarret Stoll, who had left his feet and was sliding toward Scrivens. Stoll's momentum propelled the puck into the net, and the Avalanche deservedly picked up the bonus point.

Tonight was the first time all season the Kings have been shut out. So, yeah, Darryl Sutter may want to reconsider his old lines. Carcillo-Fraser-Vey wasn't too bad as the fourth line, and Fraser-Vey again did some penalty killing work. But swapping the top three left wingers to put King and Brown back in the top six might be prudent. It's clear that the Kings' best lineup isn't one with Tanner Pearson in the top six (yet), and the rapidly improving Matt Frattin was sorely missed. Heading into crucial matchups with San Jose and Vancouver, LA needs to find their scoring touch again.