The Kings fall behind attempting to kill the Canucks' eighth power play, but Mike Richards ties it with under three minutes left, and Anze Kopitar gets the winner in overtime. Scrivens makes 37 saves in the 3-2 win.

Have you ever seen a team totally run out of energy? That happened tonight in the third period, after the Los Angeles Kings failed to kill the Vancouver Canucks' eighth power play of the evening. Henrik Sedin put the Canucks ahead 2-1, and the Kings got almost nothing going for the next ten minutes.

Game over, right? Somehow, the second line (who combined for over ten minutes of PK time tonight) found a goal with three minutes to go, and Anze Kopitar finished off a bizarre 3-2 victory with an overtime game-winner.

We were blessed with the presence of Jeff Carter tonight, and he picked up an immediate shot on goal to kick off an active period for both teams. (Carter didn't get much going for the next 55 minutes, but we'll get to that.) Both LA and Vancouver picked up plenty of shots, but the only goal came from the Kings' new fourth line. You rarely see a fourth line as offensively minded as Kyle Clifford, Linden Vey, and Tyler Toffoli, and once they managed to escape their own zone they made a play. Slava Voynov escaped a penalty for tripping Brad Richardson in front, and Tyler Toffoli soon tapped the puck ahead to Linden Vey. Vey and Clifford got a 2-on-1 in the other direction, and Vey played it perfectly, holding the puck just long enough to draw the defenseman before feeding Clifford. Clifford went to his favorite move, beating Roberto Luongo with a backhand.

The Kings killed off a Justin Williams penalty with no real trouble near the end of the first, and even set up Williams at the other end with a golden chance to make it 2-0. That was merely an appetizer for an insane second period, and if you haven't already seen the penalty summary, check it out: 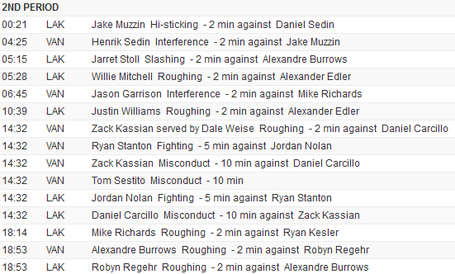 That first one was a wild swing of the stick by Jake Muzzin to the mouth of Daniel Sedin, and it kicked off a period which stretched the Kings to their limit. Ben Scrivens was fantastic for the second straight game, and he had to make six saves on that first power play. After that, the Kings were awarded a power play on a really terrible call against Henrik Sedin, but the Canucks got the man advantage right back when the Kings took two penalties in 13 seconds. Fortunately, the PK helped Scrivens a lot more after that, blocking shots and clearing rebounds from the front. Here's what they had to do tonight:

Massive credit to the team for holding out against the Canucks' power play for so long. But the Kings could not get anything going in between, aside from an Alec Martinez shot on a Kings power play which rang off the post and a huge hit by Jordan Nolan (and Jarret Stoll at the same time) on Henrik Sedin. Shots ended up at 13-2 Vancouver, and after a large scrum which actually gave Los Angeles a power play, the Canucks managed to score. A long Chris Tanev shot beat Scrivens with Dale Weise running traffic in front, and Vancouver clearly had the upper hand going into the third.

The Kings got a break for intermission, but Drew Doughty put them right back down a man just 48 seconds in. The worn-out penalty killers killed that one off, but when Willie Mitchell held Henrik Sedin to give Vancouver one more shot, they took advantage. A point shot from Jason Garrison got caught up in front of the net, and Daniel Sedin fed Henrik Sedin, who scored to put Vancouver up 2-1. Tyler Toffoli, Drew Doughty, and Jordan Nolan got three shots in quick succession, but Roberto Luongo alertly made the stops and Vancouver pressed for an insurance goal. LA, meanwhile, turned the puck over repeatedly and iced the puck a few times. But Ben Scrivens made three straight pad saves on Ryan Kesler despite ending up on his back facing the net, and LA got a chance to tie.

After losing a faceoff, the Kings took the puck the other way. Dwight King battled in the corner and moved the puck to Jeff Carter behind the net. Mike Richards drifted to the front and was left open, and when Carter slipped a pass from behind the net, Richards beat Luongo five-hole. A Vancouver crowd which had every reason to feel comfortable was stunned into silence, and the game went to overtime. Once again, a King found room in front, and this time it was Anze Kopitar. Regehr got rewarded with an assist for his penalty killing efforts, but Slava Voynov did the work, carrying the puck in, dumping from the line, and beating Kevin Bieksa to the puck below the goal line. Once he spun the other way, Kopitar found the right spot and one-timed a pass up high past Luongo.

Overall, the Kings should not have won this game. Ben Scrivens was immense in net again, making 37 stops total and 12 on the penalty kill. Because the Kings kept pace at even strength, the PK's ability to keep the Canucks out gave them a chance at the end. Thankfully, two great chances in front led to two goals and two points.

Oh, and that Anze Kopitar goal was his 499th career point. Here it is, one more time: