Jonathan Quick has been a baaaad man.

I think it's important to stress this point right off the bat: I really, really like Jonathan Quick. He was a huge piece of the puzzle in the Cup run, he steadied the ship upon taking the control of the Kings' net and he's got an arsenal of physical tools that few goalies in the NHL can boast.

So it's very frustrating that he sucks right now.

I understand why Kings' fans want to defend Jonathan Quick. It had been a very long time since the Kings last had a goalie capable of shouldering a heavy workload while providing even league average goaltending. We all remember Yutaka Fukufuji and Danny Taylor and Barry Brust and *shudders* Dan Cloutier. From the 2000/01 season to the 2007/08 season (the last before Quick arrived), LA's goalies with more than 1000 minutes in a season put together a .901 save percentage, cumulatively. Just three goalies in that span managed to post a save percentage better than league average. Not one of those three took on a true starter's workload. That sample also fails to include many of the atrocious goalies that I'm sure you still have nightmares about.

Quick came to the Kings at the right time. This fanbase was ready to stand behind a goalie. We had previously tried to stand behind Jason Labarbera, but he didn't want to stand with us. Enter Jonathan Quick.
Things got off to a good start. In 2008/09, his numbers were safely above league average. Although he slid back in 2009/10 - his first full season - fans were still eager to defend him as he was the goalie for the first Kings' playoff team in eight years. An army of excuses was ready to descend upon any criticism of Quick, no matter how valid that criticism may have been. However, he was young, and that was his first full season in the NHL. It was reasonable to expect a hiccup or two. When he took a serious step forward in 2010/11 and returned to above average goaltending, some of my personal doubts (and I'm sure the doubts of others) were quelled. We all know about his 2011/12 season already.

After signing a contract extension and waiting out a lockout and recovering from back surgery, Jonathan Quick entered the abbreviated 2013 season full of fanfare. He immediately allowed 5 goals to the eventual Stanley Cup champions and followed that up with the worst statistical season of his career. It was also a historically bad one among Kings' goalies. However, his numbers course-corrected in the playoffs and he - with the aid of excellent defense - carried the Kings' to the conference finals, only to be ousted by the same team that rudely greeted him.
In the calendar year of 2013, Quick has a .900 save percentage during the regular season.
Unfortunately, his poor start this season has caused some people to wonder who the real Jonathan Quick is. In the calendar year of 2013 (combining last year's lockout shortened season and this one so far), Quick has a .900 save percentage during the regular season. It's been dragged down even further by his poor play so far this season, even though his 2012/13 season was so bad that Robert described it as "unsustainably poor."
Just how bad has he been? Take a look for yourself. Below I've included a table that displays all Kings' goaltending seasons from the 1990/01 season to now on the condition that the goalie played more than 1000 minutes in the season. It's sorted by variation from the league's average save percentage in that season, with the best number at the top and the worst at the bottom. I have three entries for Quick's 2013 listed. The easily identified one is his 2012/13 regular season. It's the third worst season from a Kings' goaltender in 22 years. I also have two other entries listed that cover his play in the calendar year of 2013. That is everything since last season started. One includes his playoff run and one does not; they are labelled as such. 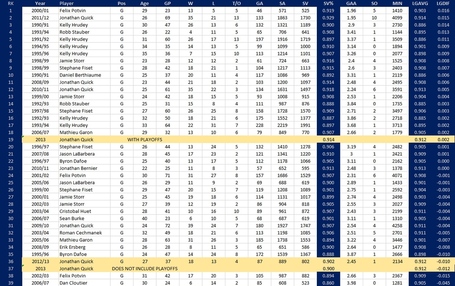 If you include his playoff run, Quick's 2013 performance just about mirrors everyone's favorite journeyman goaltender, Jason Labarbera. However, save percentage is typically higher in the playoffs. While he was certainly excellent in that run, his playoff numbers have to be taken with a grain of salt when we combine them with his regular season numbers.
If you don't include his playoff run, he's been worse than Roman Cechmanek, Erik Ersberg, Mathieu Garon, and pretty much any substantial Kings' goalie you can think of except for Dan Cloutier.
Among goalies with more than 1500 minutes played in the calendar year of 2013, Quick is ranked 27th out of 32 goalies in save percentage. The only people behind him are Ilya Bryzgalov (out of the league), Martin Brodeur (fat, old, piece of garbage), Joey MacDonald (out of the league), Anders Lindback (couldn't hold down the top goaltending position in fucking Tampa Bay), and Jacob Markstrom (I've got bad news for you Florida). Even worse is that he has one of the lightest in-game workloads in the league; Quick has seen the second fewest shots per game among that group.
It should be noted that even-strength save percentage is often the go-to figure in analyzing goalies, not total save percentage. Even-strength save percentage is used to eliminate the effects of the penalty kill (which is inconsistent from team to team). Although individual seasons are erratic due to limited sample sizes, it still reduces a lot of the noise and external factors in deciding who really is and isn't a good goalie.

Using a method posted by Eric T. from Broad Street Hockey (originally researched by Brian Macdonald and Nick Clark from Greater than Plus Minus), we can attempt to estimate that very thing.

Jonathan Quick has faced 6104 shots at even-strength since the start of the 08/09 season. Given that information, we can use the linked method to estimate that his true talent level is likely within .006 of his current .921 mark. (so between .915 to .927) That does come with a caveat, though. It doesn't consider his back surgery or weigh his recent decline in performance in its results. Over the last 977 shots he's faced at even-strength (again, everything in the regular season since the most recent lockout ended), he has posted a .911 save percentage. With samples that small, we get extremely erratic results and wind up with a pretty wide range of potential outcomes. His .911 number over roughly 1000 shots translates to a true talent level that lies between .907 to .926. However, we could probably say that about a lot of goalies.

The positive thing about those ranges is that both say him returning to at least league average form is a possibility, maybe even a good one. Another positive for Quick is in the table posted earlier. You'll see that Kelly Hrudey had a couple of league average seasons before returning to a better form later in his career. It's doubly relevant to Quick, as he is past the peak performance age for goalies, much like Hrudey was when he bounced back. However, Hrudey never dipped as far as Quick has so far in 2013.

Let's take this in a different direction and make a slight leap in logic. What if Quick is exactly what his career has so far said that he is? What if he is a league average starter? The question, from there, is if the Kings will get value on their investment. To make an accurate assessment, we're going to look at two groups. We're going to look at goalies that have performed similar to Quick and we're going to look at goalies that make similar money. Because the numbers are slightly more accessible, I'm going to focus on total save percentage. The following table includes goalies that played more than 6000 minutes between the 2008/09 and 2013/14 seasons and had a save percentage within .001 of Jonathan Quick.

Going by this, I wouldn't say that the Kings are completely out of line paying Quick the money he's getting should he return to being a .914 goalie. He is probably a little overpaid, but not so significantly that it's terribly out of line with the NHL market's norms. Next we'll look at goalies that earn a cap hit within $500,000 of Quick.

While Quick is near the bottom of this list performance-wise, he's not getting hugely outproduced by the guys directly around him. Once again though, he has to be at least a .914 goalie (or the rough equivalent) to even remotely earn his contract and he hasn't been close to that over his past 50 regular season games.
Here are the concrete facts about Jonathan Quick. He has been at both ends of the spectrum at various times of his NHL career. He has been a Vezina-caliber goalie and he's been bad enough to be expunged from the league. The Kings allow very few shots, so you can't really point to a heavy workload. It's very likely that he didn't face higher quality shots than the rest of the league, so it's hard to blame bad defense. While the summation of his career adds up to a league average (perhaps better) goalie, the most recent evidence suggests something worse.
I really do hope, both as a supporter of the Kings and a big Quick fan, that he recovers. I think he does have the ability to compete as a starter in this league. He's shown it at times. He's shown more than that at times. Now it's on his shoulders to put it together again.