The top 3 are essentially the same, but Doughty makes a move and everyone else shuffles around.

Time for Week 2 of the Los Angeles Kings Player Power Rankings. Yes, these are opinions.

Everything he was last week, with goals thrown in.

Gets a bump with the power play excelling.

He's avoided penalties as of late, and he's still getting his usual absurd ice time in all situations.

No one else has really been a top-5 player as of late, so Carter gets to stay despite his injury.

Hard to rank a guy after two games, but was outstanding on Saturday and merely very good on Thursday.

He's been filling up the box score a lot more lately. Well, a little more.

He'd be considerably lower if he hadn't played his best game of the season on Saturday. We've probably talked about him enough for now.

Racking up points thank to lots of shooting and great work on the power play. Darryl Sutter wasn't impressed with the rest of his game.

No points since his hat trick, but his lines have been playing well. So there's that.

He does keep drawing penalties. Unfortunately, he's been taking quite a few as well lately. Probably seen the last of the second line, and with that, he's on his way down.

Glued to the bench on Saturday, but played on the PK and got 14 minutes of ice time last night. Better.

He's in the lineup by virtue of Matt Greene's injury and was... fine... on Thursday.

He's still got no points. Saved another goal last night, though, and his line hasn't been awful lately.

We're still waiting to see some offense, but he fought Tyler Myers. For what it's worth.

Looked pretty good on Thursday, but we'll wait a week before moving him up the rankings.

Took Fraser's spot in the lineup with multiple forwards out, but didn't do much of anything. If the new guys stay up he's looking at the press box.

Injured, but the defensemen are doing okay without him.

Injured, and the third line still isn't scoring without him.

Scratched, and Linden Vey is being given an "opportunity to succeed."

Can we sum up this week's movements with a picture? We sure can! 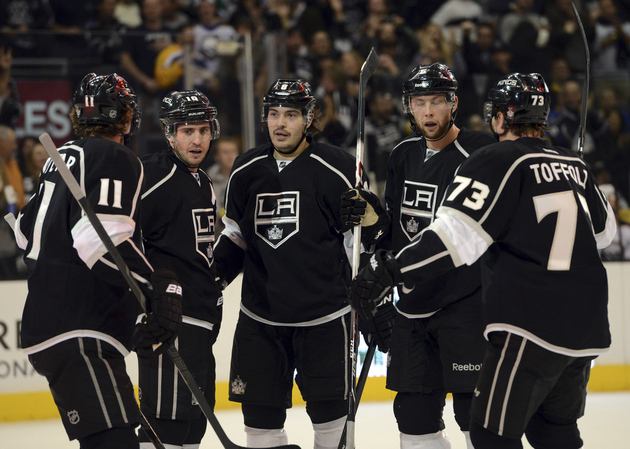 Agree? Disagree? Tell us how you'd change the rankings.