Share All sharing options for: Sabres @ Kings: Grades and Analysis

After a sluggish start, the Kings found their legs and used solid special teams play to push themselves past the Sabres.

1st line (Brown - Kopitar - Williams), B-. They were alright. Not elite, but alright. Moulson registered 5 chances all on his own, but just 1 of those came while Kopitar was on the ice. That's notable because Kopitar spent the majority of his night facing off against Moulson's line. While everyone except Drew Doughty and Jake Muzzin were quiet offensively at even strength, this line did better work than the rest of the forward corps. They went just -1 in chances while coming out slightly ahead in possession. Dustin Brown (who else?) also drew a penalty in the game, an important thing to do on a night when the power play looked as lethal as it has in a long time.

2nd line (King - RIchards - Toffoli), C-. Very quiet night for the 2nd line at 5v5 play. While Toffoli did register a pair of chances in the game, both came during a Kings' power play. Though they got beat pretty squarely (-3) in scoring chances, they did come out even in possession. Richards spent the majority of his night against the Ott line. I'm not sure what line you would call that for Buffalo, but there you go. Come back soon Jeff Carter.

3rd line (Carcillo - Lewis - Frattin), C. Trevor Lewis might win the Dwight King Award For Low Event Excellence this season. This line matched up a lot with Ville Leino's line and slightly won possession while coming out even in chances during the game. However, that was with just 1 chance for and 1 chance against. I'm personally kinda tired of seeing both Carcillo and Lewis in anything other than a 4th line role. When Lewis plays with players of equivalent skill, the game just gets caught in mud. I don't mind the 4th line getting caught in the mud, as it's what they do with or without him. I'd rather see a team lacking depth scoring putting some semblance of an attack out there in the role that Lewis's lines have been playing. Lewis is still an excellent defensive forward and penalty killer, so I have no desire to see him leave the team or starting lineup. However, LA once again notched zero 5v5 goals (and just 5 chances), and I can't help but think that part (probably a large part) of the reason is that opposing teams just do not have to worry about the Kings' depth.

4th line (Clifford - Vey - Nolan), D. I wanna get this out of the way, just so Rudy doesn't tell me to eat shit again. I don't think Linden Vey was the problem. At any rate, the 4th line got worked over pretty hard. They didn't receive a tough match-up, mostly squaring off against ZEMGUS GIRGENSONS. They didn't get a lot of faceoffs, but the odds weren't stacked against them in that regard. Unfortunately, neither of those facts stopped them from losing possession (Nolan and Vey were the worst two on the team) and chances rather badly. Vey did set up a pair of chances in the game, making him the only of the trio to be involved offensively. Jordan Nolan wasn't particularly engaged in this game.

1st pairing (Muzzin - Doughty), C. Up and down is the best way to describe this pair's night. I thought they were excellent offensively, perhaps the best weapons the Kings had on the ice regardless of position. They did struggle defensively though. Sutter once again gave them more d-zone starts than anyone else on the team, but they also got quite a few o-zone starts. They did get the toughest task on the team by seeing a lot of the Moulson line. Still, they allowed far too many chances and conceded too much possession. Sutter called out Muzzin in his post-game comments and, as much as it pains me to say it, I agree. Muzzin got bailed out by Doughty and/or Quick a time or two. Muzzin had been excellent prior to this game in my estimation, but it's fair for Sutter to say that he needs to be better if he plays with Doughty. That does little to explain the Regehr-Doughty pairing, but I agree with Sutter here.

2nd pairing (Regehr - Voynov). C. Without any context, I just wanna point out that Robyn Regehr led Kings' d-men in Corsi against the Sabres. ... Context. Okay. Regehr and Voynov once again received very sheltered minutes by receiving both easy zone starts and soft competition. They didn't create a lot offensively (Regehr DID set up a Richards chance, however), and got pushed around a bit in their own zone, so it wasn't a great night, but they did control possession pretty handily. However, that's expected of a pairing with Voynov on it regardless of competition, let alone with the soft minutes they're receiving. While you can't criticize them for the failings of the forwards to create offense, it's pretty simple to just point to Doughty and Muzzin jumping in to the cycle and expect Voynov to follow suit.

3rd pairing (Mitchell - Martinez), C. The 3rd pairing of the Kings saw middling minutes. They won possession but lost chances (like literally every single King except Carcillo and Frattin). I liked the pairing enough to keep it together while Greene is out. Not a lot more to say about them than that. 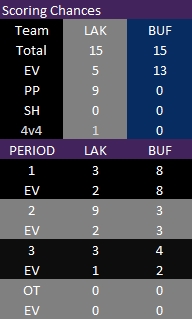 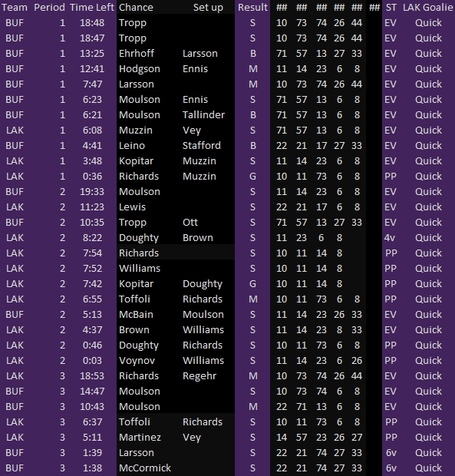 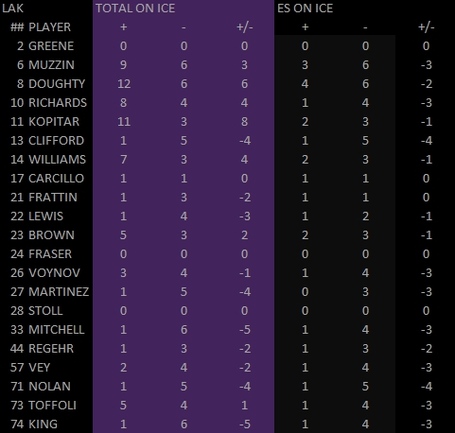