Last time the Los Angeles Kings faced the Ottawa Senators, they got themselves a 3-0 lead in the first, relaxed, and were forced to win in overtime. They nearly repeated the trick again today, but they were able to hold on in the third period before a couple insurance goals provided a 5-2 victory.

How'd it happen? Let's just say it was a good day for the first line.

The Kings have had considerable success scoring goals in December, racking up at least three goals in five of six games (and the sixth was a 3-2 shootout victory where they had 51 shots). They kept it going just 21 seconds in, with a picture-perfect breakout and a hilariously soft goal. Jake Muzzin got the puck in the defensive zone and fed Jeff Carter, who seamlessly passed it along to Dwight King down the left side. King entered the zone and took an ordinary wrist shot on Craig Anderson, high on the short side. Pretty innocent. Only Anderson let it somehow get through his shoulder and into the net. Anderson made two saves after that, earning Bronx cheers from a crowd who had already forgotten about his 40 saves on 41 shots two nights before.

Those two saves would be Anderson's last of the night, as Jeff Carter picked up the second goal four minutes later. While still a stoppable shot, it's a little harder to blame Anderson for this one given the shooter and the location. Initially, it looked like King had immediately repaid Carter for his earlier pass by setting him up from behind the net, but it was actually an Ottawa defender who put the puck on Carter's stick. Carter didn't ask any questions and fired a wrist shot which beat Anderson between the arm and the body; though Anderson got most of it, the pace was simply too much for him to handle. He skated to the bench immediately after, done for the day with the Kings already up 2-0.

Replacement Robin Lehner held out a bit longer, but the third member of the first line got a goal of his own at 12:56. King fed Voynov, whose shot from the blue line got knocked down in front. Anze Kopitar was right there to knock the rebound home, resulting in a picture of three guys who were finding this hockey thing really easy. 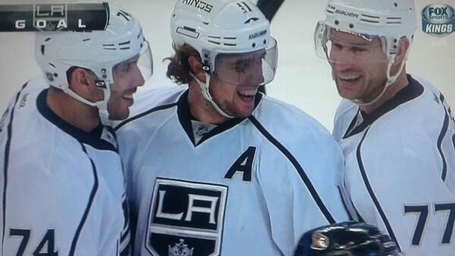 The three-zip lead had happened again, but the Kings didn't give it up as easily this time. Of course, they weren't going to give it up in the first period. Today was the 18th straight game where the Kings did not allow a first-period goal, apparently an NHL record (and an impressive one at that). Though the Senators would outshoot LA again in the second period, LA had two wonderful chances to further increase their lead. Jeff Carter almost added a fourth goal for the line off a nifty between-the-legs tip pass by King, and Mike Richards had his 140th unsuccessful breakaway of the season. Alas, Ottawa would solve Martin Jones 13:51 into the second through Joe Corvo. Jason Spezza threw the Senators' 14th shot of the period at Jones, and though he made the initial stop, the rebound bounced off a couple people en route to an open Corvo.

The third started with Willie Mitchell out of the game (upper-body injury) and Ottawa desperate and seizing momentum, so it was only a matter of time before the Senators scored again. It was also the worst goal Martin Jones has given up at the NHL level. Erik Karlsson got the puck in the middle of the ice inside the blue line and took a long shot, and Jones saw it all the way but let it creep under his armpit into the net. Ugly, ugly, goal, and it was nervous time as the Senators continued to forecheck the heck out of LA.

Thankfully, Drew Doughty picked a good time to make one of his patented coast-to-coast rushes a few minutes later. From his own zone after a faceoff win, Doughty drove up the ice, zoomed past Corvo down the left side, and steered to the front of the net. Stoll followed him to the front and was rewarded with a tap-in when the puck was knocked off Doughty's stick to him. Not to be outdone, the first line got their fourth goal of the game on a power-play rush. Carter handed off to Kopitar, who went back to Carter, who drove forward and found King inside the blue line, who drifted one way before passing back across to Kopitar, who easily scored up high. 5-2; game, set, match.

Nick got the game grades up early and I got this recap up late, so go ahead and read his thoughts on the game here. Also, good news: Chicago got blown out by Toronto, which could be a good sign for our chances tomorrow. Further good news: San Jose went down in Nashville. Everything's coming up Kings!

(Oh yeah, and Trevor Lewis came back. As you can tell from this recap, his impact was minimal.)