Kings-Preds Recap: Just Another Last Minute Loss... With a Twist!

Share All sharing options for: Kings-Preds Recap: Just Another Last Minute Loss... With a Twist!

No, the Los Angeles Kings can't just lose to teams like the Nashville Predators and the Calgary Flames. They have to make it sting.

The Kings have only lost 10 of their 39 games in regulation this season. Four of them are against the Preds and Flames, who are 13th and 14th in the West. One of them was a game in which LA outshot Nashville by 21 and allowed the winner with four minutes left. The other three: all lost on goals in the final 30 seconds.

This was the worst of them all, because LA appeared to have salvaged a point after tying the game with 36 seconds left. That didn't happen. Watch the game-winner below, and keep reading for the extended analysis.

Nashville and Los Angeles both had some decent chances in the early stages of this one. Willie Mitchell blocked an open rebound on Nashville's first power play (welcome back, Willie), which occurred because Kyle Clifford started a fight after a clean hit by Matt Hendricks. Anze Kopitar produced a key backcheck in between setting up two good looks at the other end. Kopitar came back with Dwight King and Jeff Carter to cycle the puck in Nashville's zone for a couple minutes, but from that point on, the Predators controlled the action. They were rewarded with a Patric Hornqvist goal. Seth Jones had a long shot blocked in front; Mike Fisher was quickest to the puck and put it right back on net. Ben Scrivens made the stop, but Hornqvist scored on the rebound.

The Kings would continue to take bad penalties in the second period, including a pretty awkward forearm to the face of Jones from Jake Muzzin. However, Scrivens bailed the Kings out with some timely saves, and the PK unit survived. Nashville's penalty kill wasn't so effective, as they allowed the equalizer on LA's first man advantage. Give credit to Slava Voynov for a nice shot-fake and pass to Anze Kopitar, and give your admiration to Kopitar for how perfect his wrist shot was. That attempt beat Marek Mazanec, who I promise is a real NHL goaltender. Mazanec proved it by foiling some other good opportunities for LA, the best of which was Drew Doughty's pseudo-breakaway attempt. Doughty broke to the front and the Predators lost track of him, but Mazanec was able to push Doughty wide and prevent the shot. Despite being outshot, it was a better period for the Kings.

In the third, Scrivens was solid for 15 minutes, and he needed to be after LA wasted a power play chance and struggled to slow down Nashville. Scrivens made a great breakaway stop on Matt Cullen to keep the score tied, but after a Tyler Toffoli offensive zone penalty, the Predators' power play cashed in. LA made a terrible excuse for a line change after clearing the puck, and Mike Fisher had.room to break into the zone and slap one past Scrivens on the glove side. With 3:18 to go, Nashville was in front.

The Kings briefly silenced Bridgestone Arena by tying the game with Scrivens pulled and Toffoli on as the extra attacker. Toffoli and King engaged a couple Predators in the corner, and Kopitar emerged with the puck and fed it to Carter just inside the circle. Carter immediately snapped a wrister past Mazanec to tie the game for ten seconds. Nashville won the draw at center ice, Colin Wilson drove down the side and put the puck in front, Fisher took a whack at it, and Scrivens got it with his glove but couldn't hold it. The puck appeared to barely trickle across the line, and the referee signaled goal. It appeared controversial on Fox Sports West, as there was no clear evidence on replay that the puck had actually made it completely over. Thankfully, the NHL provided a highly technical photo to show why Toronto upheld the goal: 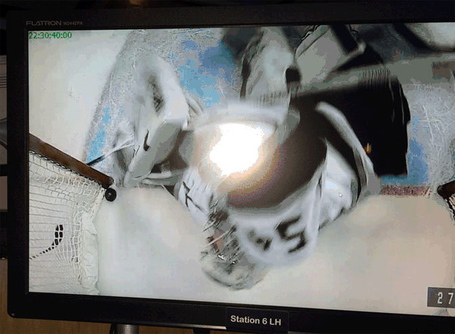 Pictures of the TV: also my favorite method! Anyway, no blame to the officials, much blame to Scrivens and a remarkable lack of focus by the team after pushing so hard for the tying goal. In a way, it's appropriate that in a matchup of the two best faceoff teams in the league, a faceoff at center ice in the final minute proved crucial to the outcome.

The road doesn't get any easier with a game in Chicago coming up, so this lost point (or two) hurts. On the bright side, it's a change of pace from the rope-a-dope fashion in which LA usually loses to Nashville. Variety is the spice of life, you know.