LA controls the play all night in Anaheim, but once it gets to the shootout, Martin Jones takes over to deliver the Kings a 3-2 victory.

The story tonight was Jonas Hiller stopping 49 Los Angeles Kings shots to carry the Anaheim Ducks to a shootout. Until it was this:

Congrats to Martin Jones on his 1st @NHL victory with the @LAKings. pic.twitter.com/J7f0cUgbC0

Nine for nine in the shootout in your NHL debut? Well done, Martin Jones, well done.

Speaking of nine: Martin Jones went nine minutes without actually facing a shot tonight. The Kings took their cracks, with mostly the Nolan-Richards-Toffoli line testing the (previously) struggling Hiller in the first half of the period. When Jones finally had to make a save, it was a good one on Saku Koivu point-blank. Drew Doughty went to the box for hooking Corey Perry, but the Ducks only got one shot on Jones. Meanwhile, the Kings got six shots on Hiller when Saku Koivu took a penalty of his own, to no avail. Dwight King, Anze Kopitar, and Jeff Carter also created multiple chances on a tremendous shift later in the first, but Hiller stopped them all. So it was a typical period for Los Angeles; unsuccessful power plays, lots of shots, not much scoring, etc., etc.

Continuing the power play drought, Dustin Penner's early second-period headlock on Slava Voynov did not lead to a goal either. Here's what the Fenwick chart (shot attempts, excluding blocked shots) looked like seven minutes into the middle frame: 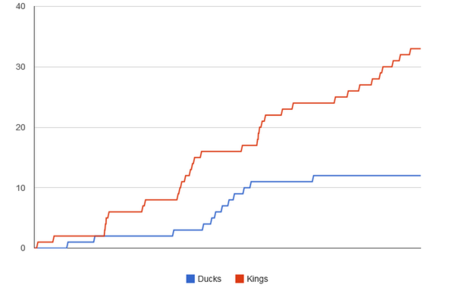 Thankfully, the torture of watching the Kings shoot fruitlessly ended thanks to Jeff Carter. Ducks captain Ryan Getzlaf made a pretty bad turnover after a faceoff in the defensive zone, if passing the puck directly to an opponent is considered bad. (It is.) Carter made no mistake after finding the puck on his stick, beating Hiller top-shelf. After breaking the ice, the Kings celebrated by giving the goal right back. The Williams-Stoll-Brown line didn't do their best work on defense, allowing the Ducks' first line a 4-on-2 in the other direction. Corey Perry set up the trailer, Hampus Lindholm, for a shot which glanced off of Jones' shoulder and skipped over him. Getzlaf knocked it out of midair into the net, immediately making up for his mistake and tying the game.

Further penalties ensued in both directions, including Slava Voynov slashing Corey Perry. And the Kings kept shooting, with LA's best power play (at the end of the second and start of the third) still not finding the back of the net. 30 seconds after Slava Voynov held Corey Perry. After Perry's third drawn penalty of the night, some poor PK coverage put Perry alone in front with Martin Jones at his mercy. Perry has scored a lot of goals for a reason, and he deked out Jones before beating him stick side. It was pretty unfair to Jones, who was solid throughout the game and bailed out the Kings after a few giveaways.

Despite the Kings' struggles to score as of late, they have been excellent at tying games in the third period, and Hiller made his one mistake of the night to help their cause. Jarret Stoll won a faceoff back to Dustin Brown, who wound up for a hard slapshot. Hiller had a read on it, but his glove only stopped 90% of the shot and it trickled behind for the tying goal with 15 minutes to go. The third period was actually LA's worst, as they followed up a 36-17 shot advantage in the first two periods with a 10-10 third period. However, the bottom 9 of the Ducks didn't threaten, and the top line couldn't find another goal.

They did get an overtime 5-on-3 thanks to not one, but two slashes on Corey Perry. And yes, that's why I mentioned every Corey Perry drawn penalty in the game... because there were five of them! But the Ducks only got one shot on the two-man advantage, though that Ben Lovejoy bid forced a sweet glove save out of Jones. Dustin Penner then took an interference penalty, and the Kings got five chances to score on Jonas Hiller. Hiller made all the saves, to ensure that the Kings would go to a shootout despite attempting 103 shots. Which is absurd.

So, Martin Jones had work to do, and after Ben Scrivens' struggles, fans were alternately curious and horrified about what might happen. The goalie was nothing to worry about, though, as he stopped nine straight shots. I'll let you watch his calm, systematic performance below instead of telling you about it. If you don't have a lot of time, skip to the end to watch Dwight King finally beat Jonas Hiller, Jones stop Mathieu Perrault, and the Kings enthusiastically congratulate their rookie goalie.

So Sutter decided on using his untested goaltender tonight in a back-to-back situation on the road against a division rival, and it paid off. Any particular reason for using Jones?

Sutter on why he started Jones: "Why not? The other guy’s not used to playing every game. Some things slip in there a little bit."

Genius! Great performance by the Kings on the second night of a back-to-back; thankfully, Jones made sure they got fully rewarded for it.