Should the Kings give Tyler Toffoli more ice time?

Share All sharing options for: Should the Kings give Tyler Toffoli more ice time?

In a recent look at Tyler Toffoli’s chances of winning the Calder we had this to say:

What's keeping Toffoli from winning? The fact that two other rookies (Tomas Hertl and Chris Kreider) have more points per game, and more importantly, get more ice time and better linemates. Darryl Sutter is not currently doing Toffoli any favors by giving him shifts with Colin Fraser and Jordan Nolan, and by limiting his power play opportunities.

This begs the question of whether or not Toffoli deserves more ice time and an increased role in the Kings line-up.

Toffoli has racked up 11 points in 15 games despite being 9th among forwards in time on ice per game. We know Toffoli is a force in the offensive zone, but it’s safe to assume that the Kings coaching staff is a little uncomfortable with his play in the defensive end. They’ve given him the 2nd highest offensive zone start percentage and rolled him against middling competition.

That being said, the Kings have been shredding the competition when Toffoli has been on-ice. They have owned 61% of all shots attempted when he has been on. Those numbers are substantially better than every other forward who has received bottom 6 minutes.

Let’s take that a step further and see what kind of effect Toffoli has had on his teammates: 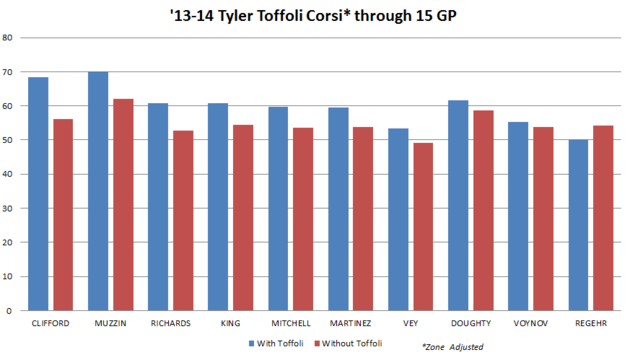 As the chart shows, Tyler Toffoli has had a very positive effect on nearly every player he has spent a substantial amount of time with. His numbers with Jake Muzzin are out of this world. Basically when he and Muzzin have been on-ice, the other team hasn't been able to touch the puck. Also, keep in mind that these numbers are adjusted for zone starts which means they compensate for his beneficial usage.

Now obviously, we are talking about 15 games and thus are dealing with a small sample, but in that time Toffoli’s results really couldn’t be any better. In fact, Toffoli has the 4th fewest on-ice shot attempts against among forwards. So whether or not Toffoli is poor in his defensive responsibilities, the opposition is getting so little zone time when he’s out there that it doesn’t matter all that much.

If you add in the fact that Toffoli has taken the 14th most attempts to go along with the 12th best points per 60 rate in the NHL at 5v5, then it is very apparent that Toffoli should be getting more ice time. And if he is poor in the defensive zone, the only way for him to improve is to get the ice time and take his knocks.

In the Kings last game against Anaheim, Toffoli was 15th in total ice time, just 8.5 minutes total, and no time on the power play. Hopefully, the L.A. coaching staff begins to recognize his contributions and rewards him with an increased role sooner rather than later.