Every goal was ugly tonight, but Mike Richards' game-winner with 2:43 left was pretty gorgeous in my eyes. The Kings outshoot St. Louis 40-22, and though Tarasenko keeps this team in it with two goals, the Blues lose their eighth straight to Los Angeles.

It's been two months since the Los Angeles Kings went to overtime. If the last two games are any indication, the Kings prefer it that way. Three days after Dustin Brown's late winner sunk the Blackhawks, Mike Richards forced a rebound past Jaroslav Halak with under three minutes to go. After some late controversy and an empty-netter by Justin Williams, the Kings finished off a season sweep of the St. Louis Blues.

It was a slow start for both teams. When a Phoenix-Nashville game steals the fans' attention, you know something ain't right. Brian Elliott was assigned to Peoria of the AHL for conditioning, and the Kings had a tougher time finding ways to get pucks past starter Jaroslav Halak. But 20 combined shots meant that there were plenty of chances to go around, and the Kings nearly scored a shorty when Jarret Stoll found himself on a breakaway. But Stoll's shot went high, and both goalies were otherwise steady in net. The Kings had looked stronger in the latter stages; would it pay off in the second?

As it turned out, it would. Jonathan Quick robbed Vladimir Tarasenko early in the period with a toe save, and from there the Kings had the majority of the chances. Rob Scuderi took a slap shot which Halak couldn't corral, and Anze Kopitar got the rebound and stickhandled around Halak. His backhander slid across the goal line, and Dustin Brown ended up pushing the puck across for his 13th goal of the season. But the Blues soon equalized thanks to a power play goal. Much like the Kings' first tally, it was preceded by a terrific save, as Halak prevented another Tyler Toffoli goal with his blocker. The Blues kept a strong forecheck going on the man advantage soon after, and David Perron set up Vladimir Tarasenko in front of the net. The first shot was blocked, but Tarasenko got the puck back and slid it around Mike Richards into the gaping net.

The Kings responded quickly. Stoll and Trevor Lewis pressed forward on a 2-on-2, and as usual, Stoll took the shot. It was blocked, but Trevor Lewis got to the bouncing puck and had two attempts to beat Halak. Lewis chipped a backhander off of Halak and the post to put Los Angeles back in front. The shot margin during the second was 14-8 LA, which was standard for the game (both the first and third periods featured a 13-7 spread) and standard for the way the Kings have played St. Louis this year. But the third period didn't begin according to plan for a team which is accustomed to shutting the door when leading after two. Tarasenko was the impact player for the Blues all night, and while Jonathan Quick contributed (negatively), it was his quickness and awareness that helped St. Louis tie it up, Rob Scuderi has made his name by clearing pucks from the crease, but when Alex Pietrangelo's point shot trickled through Quick, Tarasenko was able to get his stick on it before Scuderi and knock it in at the 6:44 mark.

St. Louis held their own with the score tied, but they had no shots in the final five minutes, and Los Angeles made it clear that they wanted to win in regulation. Appropriately, Richards won the game on a bit of a garbage goal. Toffoli entered the zone with control and threw the puck deep to Carter, who turned and flung the puck to the front. Richards battled for the puck, and though Halak had the low parts of the net covered, things turned frantic once Jeff Carter ran into the back of the net. Whether or not he meant to do it, Carter's impact lifted the net forward (but not off its moorings), and it may have created the room needed for Richards to jam the puck home past Halak's left skate.

[EDIT: Added a .GIF of the push below. Intentional? Legal?]

From there, the Kings survived an inadvertent high stick on David Backes by Justin Williams without punishment, and Williams ended up with an empty-netter after two near misses. An annoyed Backes had gone full Doan by this point, and he leveled Williams after the puck went in, causing a scrum. Never mind that a Blues stick lifted Williams' stick in the first place, Backes was angry, and he finally showed some fire once it didn't matter.

It's another win for the Kings, though, and the team is playing well and getting some bounces to show for it. Not even getting leveled was going to ruin JW's mood. Hope you all feel like this going into the weekend! 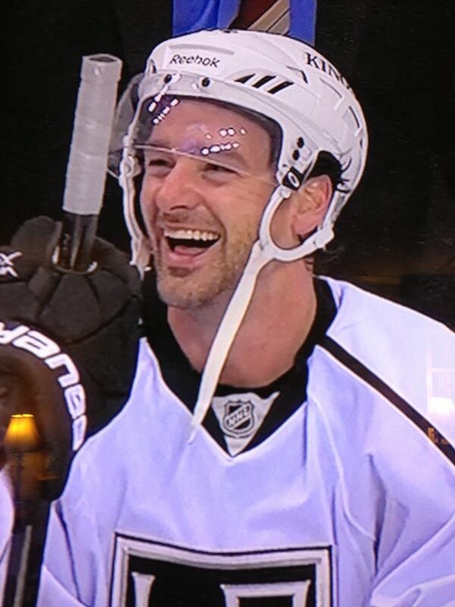