Video: Shanahan on Rick Nash and Dustin Brown, side by side

As long as a guy isn't injured, you'll probably get off.

Share All sharing options for: Video: Shanahan on Rick Nash and Dustin Brown, side by side

"If someone can explain the decisions on what warrants a suspension and what doesn't, please let me and the rest of guys know." -Joffrey Lupul

Well, Joffrey, Brendan Shanahan's explanation for the Brown ruling has arrived. I don't know what you'll think of it.

In this case, a lot hinges on the injury resulting from the play.

Shanahan does acknowledge that Pominville's approach was low (indeed, it wasn't head height), but Brown is given the responsibility because Pominville's head didn't dip in a sudden movement.

Here's my rebuttal to all those who think Brown was deliberately targeting the head here, instead of the body -- he'd have to anticipate Pominville was going to make contact with his body bent sideways, like so. 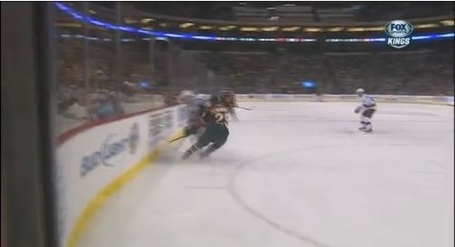 A lot changes if Pominville delivers a hit rather than attempting a poke check: contact with the head, injury, everything.

Just for fun, let's compare this video to the controversial ruling on Rick Nash, which resulted in no suspension:

Rick Nash leaps at a player in a vulnerable position, but doesn't quite connect. So he walks.

This ruling, like many others, was greeted with widespread criticism. Many wondered if the NHL would ever establish a consistent standard.

Joffrey Lupul famously asked how players were supposed to know what will be punished and what won't, when he was suspended while Nash got off. I'd say players should just hope that whatever they do, no matter how reckless or calculated, doesn't result in injury.

Then you're probably safe. Maybe.

I respect that this is a difficult and thankless office to hold. But it's no surprise that the Wheel of Justice jokes keep rolling in, season after season.

I don't mind that Brown got a suspension per se -- though Pominville put himself in a vulnerable position, Brown has to be aware of what he's doing. But in my view, player safety would be better served if all are punished for their actions no matter what the result. If you're going to punish reckless play, punish reckless play. This goes right back to ownership: how much safety do they want?