When Quick returned to form after his back surgery, the Kings reaped the benefit in the postseason.

After Jonathan Quick's back surgery in August 2012, he faced a long road to recovery. He hadn't played a game for half a year, and he struggled at the start of the season. Though the Kings' defense missed Matt Greene and Willie Mitchell, Quick's struggles could not be attributed to facing an excess amount of shots or scoring chances. Quick needed time to recover, and performed well below his established talent level for a while.

We knew he would return to form -- the question was, when?

This chart shows Quick's improvement over time in the regular season. He turned a corner with the March 25th victory over the Blackhawks, and climbed steadily upward after that: 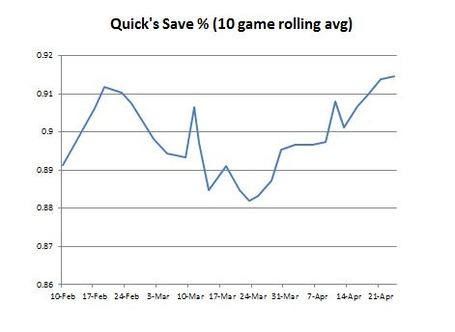 Though Quick finished the season with a very low .902 SV% overall, all signs pointed to him being on an upward trend.

This trend continued in the playoffs, where Quick out-dueled Elliott in a tough six game series:

Even taking into account one well-publicized puck-handling mistake, it's safe to say that Jonathan Quick's play was the difference against the St. Louis Blues. Fortunately for the Kings, his recovery came at exactly the right time.