For the first time in the series, the Kings are indisputably the best team on the ice, and they win 3-0 to take a 3-2 lead in the Western Conference Semifinals. Quick earns another shutout, while Kopitar, Voynov, and Carter score.

Chalk it up to home ice. Chalk it up to a sudden dose of adversity. Chalk it up to some maligned players rediscovering their form. Or, just chalk it up to the guy between the pipes. Tonight wasn't a must-win in the literal sense, but after two lackluster games and facing a Game 6 back at HP Pavilion, the Los Angeles Kings were in deep trouble if they didn't step up tonight. Fortunately, they did just that, outplaying the San Jose Sharks from the opening faceoff and winning 3-0.

A scoreless first kept Kings' fans nerves fully intact, but it was reassuring to see some of the physical play and strong forechecking that characterized the first-round turnaround against St. Louis. Much of the talk on NBCSN during the game was about hitting; the Kings had a hit advantage in Game 4 simply because they were chasing San Jose for the entire game, but tonight the huge disparity was a side effect of the Kings' positive play. Matt Greene and Dustin Brown were especially effective on that front; with Greene bringing the quality (two huge hits midway through the first to set the tone) and Brown bringing the quantity (seven hits on the night). But hits don't do any good if you can't score, and though Anze Kopitar hit the crossbar once and set up Williams for a golden chance at period's end, the Kings couldn't find the net in the first as Niemi matched Quick.

Shots were 9-6 in the first, and the shot attempts were even more lopsided. In the second, the Kings continued to press the action and outshot San Jose 9-5. Things picked up in the second during the following sequence:

The first goal appeared to be imminent, and to the overwhelming joy of Los Angeles, it was the struggling Justin Williams and Anze Kopitar who created it. After Antti Niemi lost his stick, Voynov's shot was blocked by Joe Pavelski, but the Kings patiently moved the puck around. Williams had initially set up the rush, and he ran traffic in front of the net as Kyle Clifford wound up for a long shot. Williams had drawn three Sharks' attention in front, and when the shot deflected off of him to the other side of the net, Kopitar was there. He quickly stickhandled and tucked the puck past the outstretched leg of the Sharks goaltender to give LA the lead at 18:08 of the second. It was a well-earned goal after the Kings had controlled the entire frame, and it was just one moment of a very good performance by Williams and Kopitar as they skated with Kyle Clifford.

We summarized T.J. Galiardi 's beef with Jonathan Quick yesterday, during which he implied that Quick dove at every opportunity. In a delicious twist, Galiardi delivered a cross check to Quick with 1:10 remaining in the period, spawning "Did he embellish THAT?!" jokes from everyone in Los Angeles and sending him to the box. Galiardi didn't agree with the call and made an appropriately ridiculous remark after the game, but the damage was done. LA capitalized on it 53 seconds into the third. Trevor Lewis (who had a really solid night centering the third line) won a faceoff against Joe Thornton, and as Galiardi left the box, Slava Voynov's long slapshot cleanly beat Niemi.

It wouldn't have been a surprise to see the Kings retreat into a shell much as the Sharks did to protect their hard earned lead in Game Four. While it occurred to some extent, LA still managed to generate some chances the other way, as Trevor Lewis rang a shot off the post. The running subplots continued as Galiardi was nailed by Matt Greene, and Joe Thornton... ahem... embellished to draw a tripping penalty on a disgruntled Anze Kopitar. Another superb penalty kill kept the Sharks frustrated, and the refs whistled a questionable roughing penalty on James Sheppard to run the clock further. Jonathan Quick did the rest, denying Brent Burns with the glove and Joe Pavelski with the chest in the final minutes, and Jeff Carter finished it off with an empty netter. Momentum back with LA, and the Kings now have two chances to eliminate San Jose... one of which will be at Staples Center, where LA has now won 12 straight. 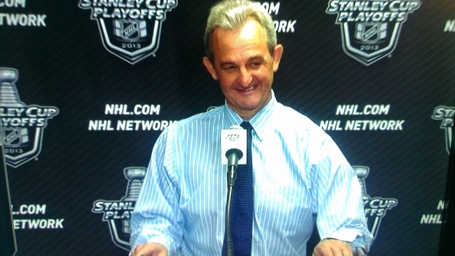 What'd I miss? What did you think? Your input is welcome in the comments.