Mark your calendars: the NHL has confirmed the outdoor Kings-Ducks matchup at Dodger Stadium, and a date and time have been set. The event will be part of the 2014 Coors Light NHL Stadium Series.

It's been all but certain for a while now, but the NHL has officially announced that the Los Angeles Kings and Anaheim Ducks will face off in an outdoor game at Dodger Stadium on January 25, 2014. The game will be at 7:00 PM Pacific time, so the lights will be on and the stars will be out (even if the smog covers them up). The full press release is here, but we've picked out some choice quotes from Gary Bettman and Luc Robitaille below (emphasis mine).

"With their meeting in the 2014 Coors Light NHL Stadium Series, the Ducks and the Kings will write the next chapter in the exciting story of NHL hockey in Southern California," Commissioner Gary Bettman said. "At a venue that represents so much glorious sports history, this match-up of Stanley Cup champions will raise our outdoor initiatives to bold new heights. We know the game will be a treat for our fans, and we thank the Ducks, the Kings, Coors Light, Dodger Stadium and the Los Angeles Dodgers for bringing it to life."

The motivation for this game is clear in Bettman's comments. It's first and foremost an attempt to do something unprecedented. The Winter Classic has been a huge success for the NHL; whether or not you agree that the Stadium Series is overkill, this particular game offers some novelty when held up against the past Winter Classics. Secondary to that: we're in the middle of a perfect storm of Southern California hockey success (the 2012 Cup Champs and the 2013 Pacific champs), improved technology, local hockey buzz (Lakers, Clippers, and Dodgers all struggling), and increased national prominence. The NHL couldn't have asked for a better time to bring outdoor hockey to Southern California.

"This is a credit to our fans and the amazing support they have shown to us and the NHL these past few years," Robitaille said. "This will be a sporting event like no other that has ever been seen in Southern California and we are proud to be a part of it."

This is pretty much all that needs to be said. I'm a lifelong Dodger fan, so I certainly see the historical value of holding this game in perhaps the sports mecca of Los Angeles. But even from an aesthetic standpoint, the palm trees, surrounding views, and proximity to both downtown Los Angeles and Hollywood scream "Southern California" to those watching in America and Canada. And as an added bonus, Dodger Stadium has gotten a facelift with the new Dodgers ownership making improvements to the old stadium; it ain't a sparkling modern facility, but it's certainly not as antiquated as it once was, and it's suitable for this event.

Not everyone is on board with this, but if the complaints are mostly confined to blog comments like the ones below from the NHL.com article, I think we'll be fine. And I can guarantee that most of these skeptics are going to tune in on January 25. 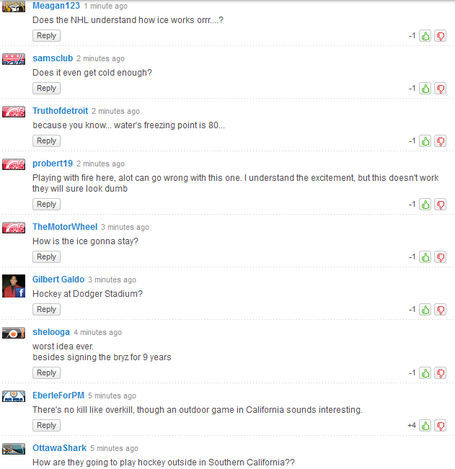 We'll be exploring and debunking some of the common doubts about this game in the future, but as of now, let's ignore that. The game is going to be a showcase of the Kings and the Ducks and a big moment for hockey in this state, whether or not other fans truly appreciate the significance. If the two teams can do their part to set up a playoff matchup this year, we'll even have a little history going into the showdown. Read Anaheim Calling's take on the game here.

Let's hear your perspective. Is this a must-see event? What are you most excited about? What does this mean for hockey in Southern California?