The hockey gods gave the Kings an early lead and Quick kept it close, but L.A. soon fell as they lost a game they deserved to lose.

Share All sharing options for: Kings vs Blackhawks Game 1: Grades and Analysis

The Kings showed up to the United Center with less than their best. They were heavily out-shot and struggled mightily to get sustained control of the puck. Or as Robyn Regehr put it: "We didn't do a very good job right off the start, getting out-shot considerably the first two periods, not doing a good job coming out of our zone, turning pucks over, not sustaining pressure on the forecheck."

Jonathan Quick was solid yet again and his effort kept the game close, but the Kings lack of offensive production did them in. They'll have little time to let this performance stew as game 2 rapidly approaches.

For a recap, including highlights and more: click here. 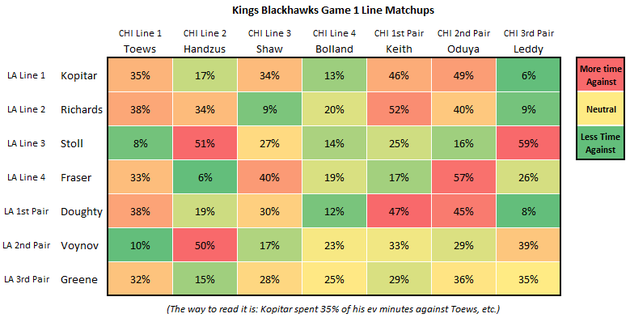