For the first in our series of looking back at Kings' 2013 performance, we take a look at Anze Kopitar.

(Glossary --note SC above stands for "scoring chances". Credits: Hockey Analysis, Behind the Net, and NHL.com. s/t to Fear the Fin.) 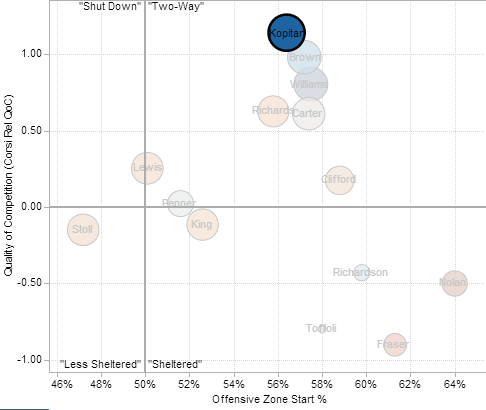 Positives: Anze Kopitar was again one of the more dominant players at even strength this season and that was even while receiving minutes against very difficult competition. When Kopitar was on ice at 5v5, L.A. owned 61% of all shots attempted. In addition, he was very strong defensively, allowing only 12 scoring chances against for every 60 minutes of even strength time-- best on the team among forwards.

Kopitar's puck possession prowess can best be seen when looking at the effect he had on his teammates' numbers. He saw most of his 5v5 time lined up next to Dustin Brown, Justin Williams and Drew Doughty. When Kopitar was on ice with them they helped the team own over 60% of all shots attempted. When they were without Kopitar each of their numbers dropped (Brown -9.9%, Williams -1.3% and Doughty -6.4%). So he played a vital role in helping the Kings to their league leading puck possession numbers.

In addition to his prowess at even strength, he lead the team in assists and points at all strengths. Averaging 20:28 minutes a game, he saw lots of time on both the power play and penalty kill. On the man advantage, he logged the most points (despite not recording a single power play goal) with 13.

Negatives: Kopitar really struggled this season with being assertive as a goal scoring threat. He had the 9th worst shot rate at even strength and 8th worst at registering scoring chances. In fact, his shot rate of 6.45 shots/60 was his lowest since '07-08. And on the power play that phenomenon was even more pronounced as he only registered 3.56 shots on goal for every 60 minutes of power play time. That was by far the lowest on the team and 5th lowest in the entire NHL.

In spite of his paltry shot production, he still managed to score 10 goals at evens. That was due in large part to a hot run in shooting percentage. He shot 13.1% at evens this year which was 2.5% better than his career percentage coming into this season.

Kopitar also struggled once the playoffs came around. His possession numbers dropped from among the best in the league to mediocre. The reasons for this are mysterious. Many thought he was playing with a serious injury, but that seemingly turned out not to be the case once they were eliminated and the team became more forthcoming about injuries. Part of the drop can be attributed to his very low offensive zone start percentage as he was accorded an even more defensive role in the post-season, but it doesn't explain all of it.

Looking Ahead: Following Kopitar's poor playoff showing, he was subject to some criticism among the Kings hive mind and even from GM Dean Lombardi. I think it's important to keep things in perspective by looking at Kopitar's larger body of work over the recent past rather than focus on his performance in a small sample of 18 games this post-season. Even putting aside Kopitar's strong 2012 run in the playoffs, there should be little doubt that he has been an elite forward in the NHL over the past 3 seasons. At even strength, he has been the 18th most productive forward in terms of points in the NHL. In addition, he has put up some of the best possession numbers in the NHL over that time period-- while also being the youngest player among those in the top 20.

Grade: If not for his poor showing this post-season, Kopitar would have gotten an easy "A". His mediocre post-season and his lack of assertiveness on offense drop his grade down to a B in our book.