We continue down the middle with our player evaluations. How well did Mike Richards play this season?

(Glossary --note SC above stands for "scoring chances". Credits: Hockey Analysis, Behind the Net, and NHL.com. s/t to Fear the Fin.) 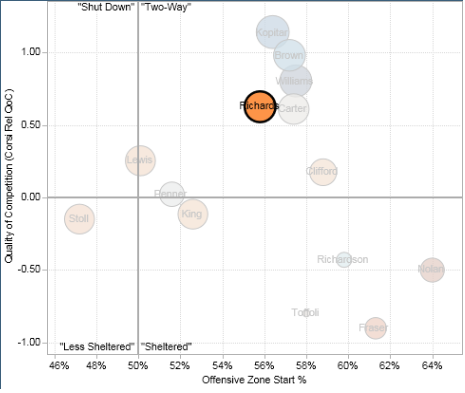 Mike Richards entered his second season as a King facing questions about his scoring ability. Thanks to a wildly productive season on the first power play unit, Richards did see a jump in scoring, as he finished fourth on the team in points despite not shooting especially often. With his help, the Kings finished the season as a top-10 power play unit. Richards also ranked fourth in a key defensive metric; as Robert examined yesterday, Anze Kopitar received the toughest minutes of any Kings forward this season. Naturally, Kopitar's linemates (Dustin Brown and Justin Williams) ranked second and third in Quality of Competition, but Richards followed right behind them in fourth.

Richards also adopted a larger leadership role in his second season with the team, wearing an "A" on his sweater with Matt Greene sidelined due to injury. Richards talked with Jon Rosen about being more comfortable in the room, and found opportunities to announce his leadership presence early on. Remember his Gordie Howe hat trick against the Blue Jackets consisting of an early assist, a late goal, and 19 minutes of penalties for avenging a dirty hit against Brandon Dubinsky? Big-time intangible points there.

Richards also scored the final goal of the Kings' season, the improbable equalizer in Game 5 against the eventual Stanley Cup Champions. The (temporary) season-saving goal capped off an excellent postseason for Richards, who was leading the team in scoring when a Dave Bolland hit knocked him out for Games 2-4. With Kopitar and Brown (among others) struggling mightily, the Kings may not have advanced to the Western Conference Finals without the contributions of Richards.

Possession numbers were a relative weak point for Richards; for the second year running, Richards posted the worst possession numbers of his career in relation to his teammates. Granted, the superb numbers of the first line didn't help much, as his overall performance improved from 2011-2012. But this illustrated a clear gap between the first and second lines... at least during the regular season. Richards also saw less time on the penalty kill this season, ranking fifth on the team amongst forwards in shorthanded ice time. This was part of the reason why he played a career-low 16:21 per game and actually saw less ice time than third-line center Jarret Stoll.

But what about putting points on the board? Despite the noticeable overall scoring increase, Richards actually racked up points at a lower rate at even strength than he did last season. To give you some idea: Jeff Carter scored 18 even strength goals this season. Richards had 17 even strength points. This struggle was reflected in his plus/minus, which was a team-worst -8. It's an unpredictable statistic**, and one that was largely due to bad luck (his PDO was 960, worst among Kings forwards). Having said all that: still worrisome to see him take home the Jack Johnson Trophy* this year.

Many people thought that Mike Richards was brought to Los Angeles to be the 1B center to Anze Kopitar's 1A. During his two years in Los Angeles, he's pretty clearly solidified his place as the second-line center, but with Jeff Carter on his wing from the get-go, Richards had a better season overall in his second year with the Kings. The days of Richards as a point-per-game scorer are over, especially if he only plays 16-18 minutes per game as he did this season. But he'll probably be expected to bump his scoring total back up to the 60-point mark or so and to improve his two-way performance. This would allow Darryl Sutter to increase his ice time and take some pressure off of Kopitar, who looked spent for most of the playoffs.

Any expectations will also be affected by his new left wing if Dustin Penner leaves town. New acquisition Matt Frattin or rookie Tyler Toffoli might be thrown into that slot, with Dwight King (as always) in consideration for the role.

Though he still struggled at times with possession and didn't offer much in the way of 5-on-5 scoring, he was a capable second-line center during the regular season and a force during the Stanley Cup Playoffs. His final two months push him to a B.